‘Vote with your heart and make the difference’ – Nick Clegg
Photo: Girish Gupta

‘Vote with your heart and make the difference’ – Nick Clegg 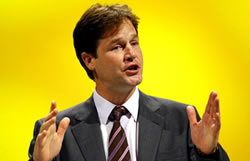 Months of campaigning by hundreds of parliamentary candidates and hopeful councillors are coming to an end this week, as the country heads to the ballot box on Thursday to vote in the general election.

Student Direct: Mancunion approached the three main party leaders for comments on what their parties have to offer student voters. Of the three – thanks primarily to the televised leaders’ debates – the Liberal Democrats have surged in the polls from a firm third place to now vying with the Conservatives for the popular vote pushing Labour to third position.

And it’s clear that the party are doing all they can to capitalise on this post-debate momentum. “We’re just going to keep getting out there, telling people across Britain about the change only the Liberal Democrats can now deliver,” Liberal Democrat leader Nick Clegg told Student Direct: Mancunion.

“We’re in an election that is wide open, and knowing that people really are now beginning to imagine things can be different, is what is pushing us to fight as hard as we can, for every single vote, every single day.

“All we do know is you can’t second guess the British people; there really is everything to play for.”

The Lib Dem manifesto, uniquely for the three main parties, promises to scrap tuition fees. Over the months since this policy was made public, there has been much talk of it being financially unfeasible, however, Clegg countered: “We’re going to pay for it out of spending cuts in other areas, and we’ve spelt those out in the back of our manifesto.

“Those savings include scrapping ID cards, biometric passports, and scaling back tax credits for families on higher incomes.”

Clegg did admit that economic problems meant that tuition fees would not disappear overnight. “We are going to have to phase them out over six years. But – and this is crucial – we can start immediately, beginning with fees for students going into their final year.

“That way, under a Liberal Democrat government anyone at university in the autumn will see their debt cut by at least £3,000.”

Conservative party leader David Cameron described this six-year wait as “small print” when he was put on the spot by a Southampton University student. “They aren’t going to do it for six years. Six years! I think that’s a complete con for people.

“I think it’s better to be upfront as I am and say we can’t get rid of the tuition fees and the top-up fees because we want good university places. Don’t be fooled by people who say they’ll get rid of tuition fees. We can’t afford it when we have this big budget deficit. The numbers just don’t add up.”

Labour leader and Prime Minister Gordon Brown last week told “bigoted” Rochdale resident Gillian Duffy: “If you get a degree and you earn twice as much after you get the degree then you’ve got to pay something back as a contribution. But there are … more grants than ever before.”

Recent graduates are among the many people struggling to find work, despite their education. Clegg claims to find this unacceptable. “This blow that this recession has dealt young people is totally unacceptable.”

“That’s why [we] will concentrate on creating jobs in our first year. Out of the savings I was talking about earlier, we’ll invest just over £3bn in a jobs and infrastructure package, boosting our economy by investing in high-tech, low–carbon industries, like renewable energy.”

“That package also includes a 90-day promise to young people: if you can’t find work, you won’t spend more than three months on Jobseeker’s Allowance before we find you further training or a paid internship.

“Being out of work so early on in your career can be really difficult, and it can seriously knock a person’s confidence.”

Labour candidate for Manchester Withington Lucy Powell told Student Direct: Mancunion during her campaign that a vote for the Lib Dems in her constituency was a vote for the Conservatives nationally. “At the end of the day we’re going to end up with either David Cameron or Gordon Brown walking into 10 Downing Street,” said Powell.

“It’s absurd, isn’t it?” Clegg said curtly. “To have Labour in some parts of the country threatening that a vote for us is a vote for David Cameron, and to have the Conservatives in other areas saying exactly the same about Gordon Brown. They can’t both be right, so I think it’s pretty obvious that both are wrong.

“So don’t let anyone tell you it can’t be different this time. Vote with your heart and you can make the difference.”

The country’s first-past-the-post (FPTP) electoral system is seen by many to be biased against the Lib Dems. Under the system it is possible for a party to come into power in Westminster even if they do not gain the popular vote as they will still win the most seats.

“Our electoral system is against anyone who believes in proper democracy,” said Clegg. “There has to be something seriously wrong with a system that can get a party into government with just 22 per cent of people voting for them, which is what happened with Labour in 2005.”

“I start from a very simple first principle: It is not Gordon Brown or David Cameron or Nick Clegg who are kingmakers in British politics; it’s the British people. The votes of the British people are what should determine what happens,” Clegg told Andrew Marr in November.

However electoral systems based on forms of proportional representation (PR) – such as single transferable vote (STV) which the Lib Dems suggest in their manifesto – have a tendency to produce these so-called kingmakers. Under PR-based forms it can be difficult for a party to achieve a sufficient share of the vote to govern independently. In this scenario, a coalition government would be formed behind closed doors. Therefore it could be these backroom deals, not the ballot box, which define the composition of government.

Clegg dismissed this: “The Conservatives want to convince people a change to the voting system will lead to weak government but what really leads to weak government is when people are expected to recognise a party’s mandate even when they have such low levels of support.”

Conservative leader David Cameron countered this last week: “I don’t want the electoral system to change, I think it would be a big, big mistake for this country.” In a comment piece in the Telegraph earlier this year, the opposition leader said: “The truth is that people don’t want a new voting system. They want a new politics.”

Clegg was keen to talk tuition fees, one manifesto point distinct from the other main parties’. “For me, this is about a simple principle: it just isn’t right for us to be saddling the next generation with such a huge debt burden,” said Clegg.

“Starting out in your adult life is already hard enough…. We could see students graduating with up to £44,000 worth of total debt. That’s outrageous. We have to stop it.”