An interview with Brian Cox 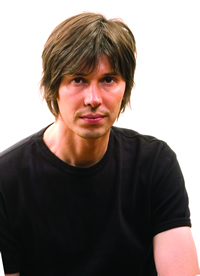 Never having been the most publically celebrated of the sciences, physics seems to be undergoing a facelift thanks in part to the work of one Manchester professor whose reputation as a scientist now eclipses that of his rock star past.


A couple of years ago, Brian Cox was an eccentricity in his department—the guy who appeared on Horizon in between being the talking head associated with CERN, the particle accelerator straddling the Franco-Swiss border.

The coupling of the Large Hadron Collider (LHC) at CERN’s success last month and its associated blanket news coverage, alongside Cox’s Wonders of the Solar System programme, have made Cox, and his ability to talk heavy-handed particle physics alongside explaining the most simple, yet endearing, of phenomena, a household name.


So as Cox finished off a public lecture to a packed University Place, scores of adults and children were already vying to be front of the queue for autographs. “That’s interesting isn’t it,” Cox told Student Direct: Mancunion after being torn away. “It’s really excitement for science and ideas and that’s what people are attracted to in Wonders of the Solar System.

“It is people connecting with science. No matter what you do with Wonders, people watch it because of the Wonders of the Solar System.”

The lecture, which was streamed live online by the University of Manchester, began with a surprisingly thorough introduction to particle physics, which would not necessarily have been understood by many in the audience but certainly would have inspired.


And it’s this inspiration which seems to be guiding Cox in his publicising of science. It was clearly the children with their hands up wanting to ask questions that excited Cox more than anything.

“I think the LHC has captured the imagination,” Cox said afterwards. “I think the BBC’s important. For me it was a combination of growing up just after Apollo and having things like Carl Sagan’s Cosmos on TV that pushes you in that direction.


“Now, it’s not as inspiring as putting a man on the moon but the LHC is an inspiring, big project that captures the imagination.” 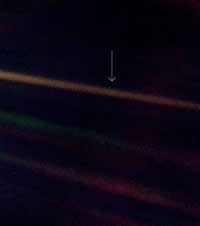 American cosmologist and renowned populariser of science Carl Sagan featured prominently later on in Cox’s lecture. Cox showed a picture of the Earth taken by the Voyager space probe twenty years ago from 6 billion kilometres away. The picture is known as the ‘Pale Blue Dot’ and features in the title of one of Sagan’s books. Cox quoted Sagan’s thoughts on the photo in his lecture.

“Consider again that dot. That's here, that's home, that's us. On it everyone you love, everyone you know, everyone you ever heard of, every human being who ever was, lived out their lives. The aggregate of our joy and suffering, thousands of confident religions, ideologies, and economic doctrines, every hunter and forager, every hero and coward, every creator and destroyer of civilization, every king and peasant, every young couple in love, every mother and father, hopeful child, inventor and explorer, every teacher of morals, every corrupt politician, every ‘superstar’, every ‘supreme leader’, every saint and sinner in the history of our species lived there – on a mote of dust suspended in a sunbeam.”—Carl Sagan on the pale blue dot.

Again, inspiration was the key feature of Cox’s address. One thing that Cox hopes inspiration will lead to is science becoming more prominent in government policy, and so receiving more funding.

Thanks to a shroud of secrecy forced by his working for the BBC, Cox approached the General Election and politics from afar. He spent a good twenty minutes of his lecture talking about the lack of science funding.

Cox did not admit so during the lecture, however, it has been reported that the man who performed in D:Ream, the band whose ‘Things Can Only Get Better’ was the soundtrack to Labour’s 1997 election win, voted Lib Dem last Thursday.


“Even now the parties are paying more than lip service to science. They know it’s useful but they’re uncertain whether it’s vote-winning. What this does is reinforces their view that it is useful, and it could be vote-winning, and they’re more likely to do it.”


I had wanted to ask Cox about God. We had discussed this in a previous interview, however, the subject was slightly glossed over then when Cox described the Richard Dawkins-led debate as “redundant”.

“I understand why Dawkins is annoyed because he’s an evolutionary biologist. If I was trying to do my work on diffraction and some huge lobby group in America suddenly decided to tell me that diffraction was bollocks, I’d get pretty annoyed about it and probably start writing books about how mad they are.


“So I understand entirely why an evolutionary biologist gets upset.


“It doesn’t matter how old you think the world is but it does matter if you think that you can throw carbon dioxide into the atmosphere and not do any damage,” said Cox. “I think that there’s a continuum of responses to irrationality and I think Dawkins is in the continuum somewhere and it’s not surprising he’s at the aggressive end because he gets a load of fuckwits hassling him all the time, so he just gets angry.

“I think that debate with fundamentalists is redundant in the sense that it’s pointless because fundamentalists are like conspiracy theorists. If someone thinks that 9/11 is a Jewish conspiracy and it was all run from Israel with the help of the Bush government, then there’s sod all you can do about it.


“You can’t talk them out of that because they’re mad.

“In the same way, I think that younger creationists are mad. There’s no way you can look at the evidence and come to the conclusion that the earth is 6,000 years old. It’s daft.

“In that sense, what’s the point in wasting your breath? There is a point if that comes into policy. If you allow schools in Britain that teach creation alongside science then there’s a legitimate political issue.

“It’s redundant unless it becomes politicised, in which case it’s not redundant any more but then it’s about policy-making rather than the actual belief system.”


Cox is able to flip from explaining the very basics of the solar system to an eight-year-old bursting to ask his hero a question to discussing the very depths of particle physics, understood fully by a very small number of people on the planet.

It is the ease with which he does this that allows him the credibility to be the public face of physics but more importantly, allows him to be an inspiration to all those kids in the audience.