High-level diplomacy between British and Chinese governments on panda leasing 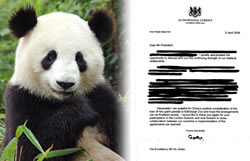 High-level diplomacy between the British and Chinese governments has paved the way for the loan of two giant pandas to Edinburgh Zoo.

Letters from Gordon Brown and William Hague to their counterparts in China reveal the enthusiasm of the UK government in securing the loan.

"The UK Government would very much welcome this gesture of friendship from the Chinese people which would symbolise the very positive relationship between our two countries," wrote foreign secretary William Hague to Chinese foreign minister Yang Jiechi last month.

The loan was also discussed at the British Embassy in Beijing over a diplomatic lunch.

China has used its cuddly bears as political footballs for decades. When the Dalai Lama, a notorious critic of the Chinese government, visited the United States in February, the Chinese requested the return of a giant panda from the National Zoo in Washington.

In 1972, Chairman Mao Zedong gave two pandas to the United States following a visit by US President Richard Nixon. Nixon responded with a pair of musk oxen. China also bolstered relations with Taiwan with the gift of two pandas in 2005.

All that remains in Edinburgh is for the Royal Zoological Society of Scotland and the China Wildlife Conservation Association to agree on the annual cost of the loan.