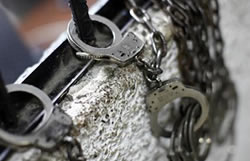 Through a stench of urine infused with marijuana, inmates of Venezuela's La Planta prison brandish machine guns, rifles and grenades while enjoying music blaring from a 6-foot high stack of speakers.

Guards are nowhere to be seen as other inmates sharpen knives and carry pistols. One even keeps hold of his gun as he plays soccer on a five-a-side court within the prison walls.

"If the guards mess with us, we shoot them," said one prisoner, who arrived at La Planta in Caracas three years ago and asked to be identified just as Pedro.

The South American nation's prisons are notorious for ease of access to weapons and drugs as well as mobile phones and computers hooked up to the Internet, allowing inmates easy access to the outside world, often to run further crime enterprises.

The country's 34 prisons house nearly 50,000 people, but were built for under a third of that, say local rights groups.

Several hundred die each year in riots and gang fights, with the crisis bursting into the headlines again in June when it took some 5,000 soldiers nearly a month to quell violence in one overcrowded prison that killed 22 people.

That put the prisons' issue high on the political agenda ahead of Venezuela's presidential election in October 2012.

At La Planta, in the ill-named El Paraiso (Paradise) district of Caracas, prison guards patrol only the perimeter. Inmates say they even fail to enter when violence breaks out.

"I've seen a man have his head cut off and people play football with it," Pedro said. Walls display scorch marks from grenades and bullet holes from regular gunfights.

Built in 1964 for 350 inmates, La Planta now houses 2,436, according to a whiteboard near the entrance. Many sleep on the floor in communal areas as rats scurry around them.

"We face a truly serious prison crisis in which the state has not shown up with solutions and this has led to chaos," said Carlos Nieto Palma, who runs a local non-government organisation, Window to Freedom, monitoring prisons.

In perhaps Venezuela's worst single prison incident, about 130 prisoners were burnt or hacked to death with machetes during gang fights at Sabaneta jail in Maracaibo in 1994.

Two years later, authorities at La Planta locked a number of prisoners into cells before firing tear gas inside. A fire broke out, and 25 prisoners burnt to death while the guards looked on, local news reports said. The charred remains took a week to identify, their bones glued to the furniture inside.

The problems preceded President Hugo Chavez, who himself spent two years in prison after a 1992 failed coup attempt.

Chavez was appalled at the conditions and disgusted with guards who, in one incident, refused to intervene as a man was raped and murdered in the cell above him, according to author Bart Jones' biography of the socialist leader, "Hugo."

When he came to power in 1999, Chavez promised to revamp the country's prison system, which he described as "the most savage in the world, even worse than many dictatorial regimes."

The government has launched a series of sports, musical and other initiatives at prisons, but rights groups say many installations remain in as dire a state as La Planta.

After the siege in June, Chavez appointed a new prisons minister, Iris Varela, who came up with a controversial solution for overcrowding—freeing 20,000 prisoners or 40 percent of the total.

"In prison, there are people that do not pose a danger to society," Varela said. "They can be handled outside prison."

Hundreds have hit the streets already, to the alarm of many in a nation where runaway crime levels in Caracas and other urban centres rival war zones.

"I want to promise the Venezuelan people that we won't let the wolves loose," Varela said.