Chávez celebrates failed coup that propelled him into office 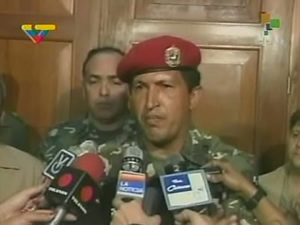 "We have failed, for now," were the immortal words of Hugo Chávez back in 1992, a young lieutenant colonel announcing to his soldiers on live television that the coup he organized against President Carlos Andrés Peréz had failed.

Mr. Chávez was unable to create a regime change that year, but his concession left little doubt he would try again.

Today, Feb.4, marks the 20-year anniversary of Chávez’s now infamous address on state television. Though he failed in his coup that year, the speech propelled the young soldier into the nation's psyche. It both led him to prison for organizing the coup and, six years later, to Venezuela's presidential palace. He won the presidency through free and fair elections, and has remained in office since.

The government has referred to the anniversary ­– abbreviated as 4F, for the date the coup took place – as “one of the most important sociopolitical events of contemporary history in Venezuela,” and huge celebrations are planned all over the country in honor of it.

His coup attempt in 1992 came at a time when there was much dissatisfaction with the Venezuelan government, mired by deadly riots over economic reform and broken campaign promises that reinforced the image of a corrupt government serving only the country’s elite.

As Chávez’s Socialist government plays up the inspiration his words instilled 20 years ago, buoying support today, opposition party candidates are preparing to choose a presidential candidate in next weekend’s primary election. The winner will face Chávez, who has been in power for the past 13 years, in elections in October. The opponent expected to win the primaries is Henrique Capriles Radonski, a charismatic state governor who, for the first time in Chávez's long tenure, has unified the opposition to put up a good fight.

But Chávez is a formidable foe for the country’s political opposition, reports the Monitor, and aside from running popular social programs funded by oil profits, he is still believed to have strong support from the country’s military. His journey to power began by rallying support in Venezuela’s military academy. One young soldier, Jesús Urdaneta Hernández, now living in a wealthy Caracas suburb, was a good friend of Chávez at the academy and helped mastermind and run the coup attempt.

"I could never have imagined the reaction of the population," Mr. Urdaneta says in an interview with the Monitor. "We were like the saviors of the people."

Chávez gained huge support from both the middle classes and the poor in the years following 4F, as he came to personify the struggle against the old oligarchy. Six years after the attempted coup, Chávez was elected president in a landslide victory.

But Urdaneta fell out with Chávez when the socialist came to power in 1999. Now a staunch member of the opposition, he is currently campaigning for governor of Guárico, a state just south of Caracas. Urdaneta is not a unique case: many of Chavez’s original supporters, like those in the middle class, have tired of the high inflation and crime rates that ballooned under his leadership.

The celebrations surrounding 4F this weekend will coincide with the summit of Alba, the regional Bolivarian alliance setup by Chávez, which includes countries sympathetic to his mission like Cuba, Ecuador, Nicaragua, and Bolivia.

"The rebellion of Feb. 4 was a historical necessity," Chávez said on Thursday, celebrating 13 years in power. "Only by way of the revolution could we emerge from the abyss."