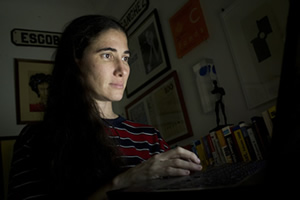 Cuban authorities on Thursday arrested blogger Yoani Sanchez along with about 20 other members of the country’s opposition, in what was her second detainment in just over a month.

The 37-year-old activist — who has won numerous journalism awards, been named on Time’s 100 Most Influential list and interviewed recently re-elected US President Barack Obama — was detained as she and others protested the arrest of opposition lawyers and activists outside a Havana police station. She was released late Thursday night.

The news was broken on Twitter Thursday by Yohandry, a pro-government website which is rumored to have been set up by the state itself as a counterweight to Sanchez’s own blog, Generation Y.

“What they do has no logic whatsoever ... I want to understand what they are thinking,” Escobar told GlobalPost in a telephone interview.

Sanchez has proved difficult to reach, likely due to her phone being cut off, as happens frequently.

Both Escobar and Sanchez confirmed the release on Twitter late Thursday, however there is little news of the other arrested activists.

The group was protesting against the arrest of Yaremis Flores, a lawyer who provides free legal assistance to opposition figures in Cuba. He and two colleagues were detained the previous day.

Among those arrested Thursday was Guillermo Farinas, a 50-year-old dissident who has gone on hunger strikes over the years after defecting from the government.

Sanchez was also arrested on Oct. 4 as she and her husband attended the trial of Angel Carromero, a Spaniard who drove the car that crashed in July that killed Oswaldo Paya, another leading dissident who in 2005 was nominated for the Nobel Peace Prize.

“We were detained for around 30 hours, separately,” Sanchez told GlobalPost last week. “There was one aggressive moment when three women tried to take off all my clothes. They nearly succeeded. It was very ugly. I’ll never get used to this.”

She said she believes it was her right to investigate the death of Paya and the government obstructed her from doing so.

Sanchez has become famous through her blog, despite her extremely limited, slow and often illegal access to the internet on the tightly controlled island. Her blog Generation Y is read across the world in dozens of languages and an English-language collection of some of the posts was published in a book, Havana Real.

She won the Spanish Ortega y Gasset Journalism Award in 2008 but was denied permission to travel to Spain to collect it. The same was true of Columbia University's Maria Moors Cabot Prize, which she won the following year. She was denied the chance, by Cuban authorities, to travel to New York to pick it up.

Under new reforms by President Raul Castro the exit visa, which Sanchez has been denied now around 20 times, is to be scrapped in January. However, Sanchez is not hopeful.

“I don’t want to feel defeated,” she said last week. “I’ll go to the office and try to get a passport. In the meantime, I’ll enjoy the illusion that I can leave.”