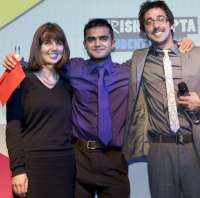 The Guardian Student Media Awards have been running for over 30 years. Gupta said of the event: “It’s great that the Guardian celebrates and gives leverage to the importance of student media. To be part of that very cool atmosphere in Camden Market last week and to receive an award at it was ace.”

The judging panel for the awards included Alan Rusbridger, Editor-in-chief of Guardian News and Media as well as Jon Snow, Evan Davis and Colin Murray chose the winners after spending a day analysing student newspapers, websites, magazines and photographs.

Newspaper of the year went to Leeds Student, while former Varsity Editor Patrick Kingsley took home the accolade of Student Journalist of the year.