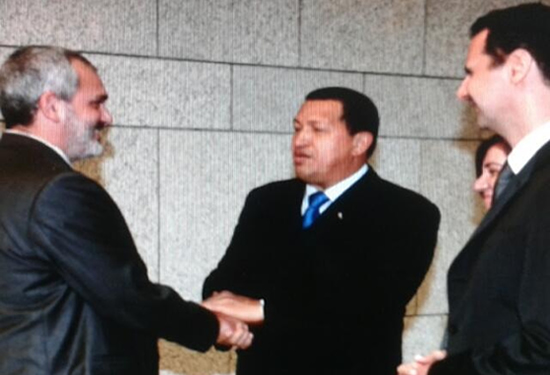 “Syria needs full support against these criminals,” wrote Venezuelan lawmaker Adel el-Zabayar in a letter to his country’s National Assembly this week. He was requesting indefinite leave from office in order to fight alongside the Syrian army, having arrived in the country two weeks ago to visit his ill mother. With the upcoming threat of military attack by the US, he has decided to stick around and fight. “Without doubt, I’ll have a weapon,” he told TIME by telephone early on Friday morning local time from a site he said was around 50 miles south of Damascus near the city of Sweida. “I’m on the battlefield now.” Zabayar has no formal weapons training and is currently carrying out more administrative tasks on the battlefield, he says, alongside government fighters.

The 49-year-old congressman, who is of Syrian descent though was born in Venezuela’s central city of Ciudad Bolívar, seems to have put himself in the firing line in accordance with his own government’s long-standing policy of friendship with the world’s pariahs. Former President Hugo Chávez, always keen to be a thorn in the side of Washington, made a point of overt friendliness with leaders despised by the West: Saddam Hussein, Muammar Gaddafi, Mahmoud Ahmadinejad. He supplied diesel fuel to Syrian authorities as the unrest escalated into a full-blown civil war last year. Echoing the doctrine that “my enemy’s enemy is my friend,” Zabayar, a member of Chávez’s socialist party, insisted that he was “not fighting alongside the Syrian government. I’m fighting against the government of the United States.”

Zabayar expresses no remorse about the violence and casualties of the war in Syria—which has claimed more than 100,000 lives so far—and blames the US for inciting hostilities as well as engineering the Aug. 21 chemical weapons attack that has pushed Washington toward launching missile strikes against the regime of Syrian President Bashar Assad. “This is a war fabricated by countries outside. All of this was planned… The opposition launched a chemical attack in order to accuse the Syrian government of doing it.”

Zabayar appears to see Syria through rose-tinted glasses. “Despite this great international campaign against Syria, I can assure you that the Syrian people are very tranquil and getting on with life as normal,” he says. “There is total confidence in the Syrian army and government. Assad is going to survive.”

The congressman harped on the hypocrisy of US foreign policy. “They’ve used chemical weapons themselves in Vietnam and other places,” he says. “There is no sincerity in the fight against terrorism on the part of the US. Al-Qaeda is good for the US in Syria but bad in other countries,” he says, referring to the presence of extremist militias amid the Syrian opposition. He gestures to the American experience in Iraq following its 2003 invasion: “They know how to start a war in Syria but don’t know how to end it.”

If the shadow of Tony Blair — the former Prime Minister who led the U.K. into the Iraq war — influenced proceedings Thursday in the British parliament, the ghost of Chávez still presides over Venezuela’s current foreign policy. Chávez’s successor, President Nicolás Maduro, has spent the week decrying American plans for intervention in Syria, after his government said it thwarted an assassination plot against him. “The plan is to eliminate me as they attack Syria,” he said speaking on state television. “Enough already of these imperial wars of conquest,” he added on Twitter. “The conscience of the world must wake up and stop this war!”

Near Sweida, Zabayar echoed his President. “The government of the US is getting into a mad war that’s horrifying the world,” he said, revealing knowledge of the previous day’s events that saw the British parliament vote against an attack. “There has been a fracture in the politics of [Prime Minister David] Cameron and the [British] people.” 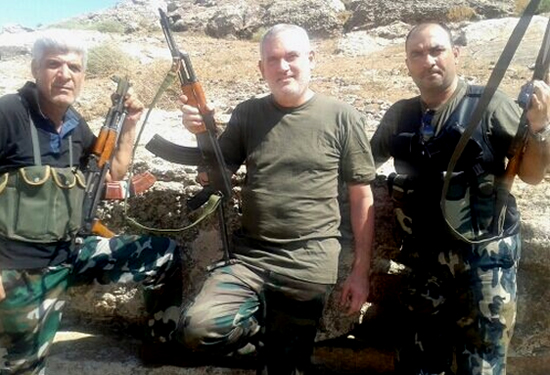 Chávez visited Assad in Damascus in 2009, on a tour that included stops in Libya, Algeria, Iran, Belarus and Russia. Zabayar was part of the delegation and his profile picture on WhatsApp — a popular instant messaging application — shows him posing with Chávez as Assad looks on smiling. The self-styled socialists were impressed by Syria’s self-reliance. “Syria was a country able to look after itself,” Zabayar said, adding that he and Chávez had been impressed that the country did not need to import much, despite limited resources. This is in stark contrast to Venezuela which, according to OPEC, has the world’s largest oil reserves though relies on imports for 70% of its food production.

Zabayar insisted that Syria wasn’t a model for Venezuela. “Every country develops its own model. Syria, with limited resources but with extraordinary planning, has developed itself successfully.” Venezuela boasts a considerable population of ethnic Arabs originally from the Levant, with a popular social club for the community in Caracas. The most prominent member of the community is Chávez’s former Interior Minister and now state governor Tareck el-Aissami. Zabayar is President of the Arab Federation in Venezuela.

In 2010, Assad came to Caracas. At the time, Chávez said that the two countries were “at the vanguard” of a “struggle… to play a fundamental role in liberating the world, saving it from imperialist and capitalist hegemony that threatens the human species.” Singing from the same songsheet, Chávez’s mentor, Cuba’s Fidel Castro, wrote an essay published in Communist newspaper Granma this Wednesday in which he accused “the Empire’s Navy and Air Force and their allies” of “preparing a genocide against the Arab people.”

Venezuela’s National Assembly formally condemned the “imperialist invasion” of Syria on Thursday and granted Zabayar his leave. A state newspaper called the Syrian forces that he would be joining “brigades of resistance.” However, those opposed to the government are not so impressed. “He was elected to work for the Venezuelan people, not to fight for the Syrian regime!” said 28-year-old engineer Samuel Akerman in Caracas. “This damages our image abroad.”

Much of why Maduro and his allies are embracing such bluster is rooted in problems at home. Maduro’s popularity, even among his own socialist party and traditional Chavista supporters, is plummeting. He has been unable to invoke Chávez’s charisma, instead making horrific gaffes — using the word “penises” instead of “fish” (forgivably similar in Spanish) when recounting the biblical story of the Feeding of the Multitude this week — and demonstrating an inability to lead as high-ranking party members fight for prominence.

The Venezuelan economy is in turmoil, with 42.6% inflation in the year to July. Supermarkets regularly lack staple products like bread, cooking oil and toilet paper. Zabayar has seen the opposite on his trip to the Middle East. “With this crisis [in Syria], you can still buy bread in the shops here,” Zabayar says. He will return to his office in Venezuela when “the threat from the US is called off, when the plan has been defeated.” As talk of war rumbles on, it seems his stay in Syria will continue.