On Maduro's lessening popularity and shakeup 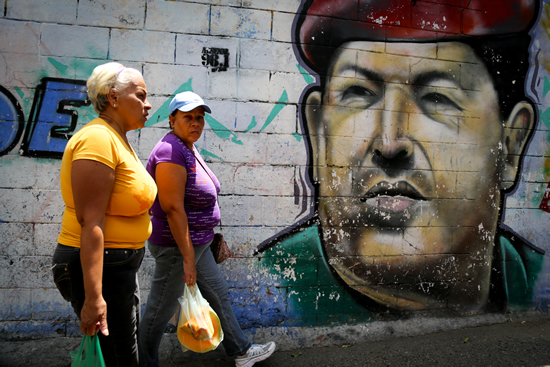 Overlooking Venezuela’s presidential palace in Caracas is the slum of 23 de enero. On its walls are huge murals of leftist thinkers. One of these depicts Christ at the centre of the Last Supper. Surrounding him are Che Guevara, Karl Marx and a host of other socialist and communist icons, including former Venezuelan president Hugo Chávez.

On the side of 23 de enero’s main square, Yoanna Ortiz shelters under a parasol from the Caribbean sun.

The 24-year-old is not impressed with Chávez’s successor, Nicolás Maduro.

“Chávez was intelligent,” she told me. “When doors closed, he would find a way to open them. Maduro, however, just talks about how the opposition is planning a coup and wants to kill him.”

Ortiz added that Maduro would be better off working towards sorting the country’s problems.

Strict economic controls have led to shortages of the most basic goods from vegetable oil and shampoo to, most infamously, toilet paper. I have seen lines outside supermarkets stretching into more than a thousand people. Prices have risen over the last year more than sixty per cent and Venezuela has one of the world’s highest murder rates.

“Things are much worse now than in Chávez’s time,” Ortiz told me, adding that it was the economy that concerned her most.

Opinion polls — and others wandering the square here — reflect Ortiz’s thoughts. Maduro’s approval ratings are in the mid-thirties. These have dropped considerably since he was elected to power after Chávez’s death a year and a half ago. And they are far lower than the numbers enjoyed by Chávez in his prime.

However, Maduro says he is keen to make a change. On Tuesday, after much hype, he spoke for three straight hours on national television to announce a big “shakeup” of government.

“We must begin a new stage in the revolution,” he began.

Rather than going down the more pragmatic route that many in the opposition had hoped for, however, Maduro appeared to veer to the left.

He ousted Rafael Ramírez, the figurehead for a more pragmatic movement within the government. Ramírez lost his three major roles: head of the state oil company, oil minister and vice president for the economy.

They are among the most powerful offices in Venezuela. And it’s worth remembering that the country has the world’s largest oil reserves. Many thought Ramírez more powerful than the president himself.

The names of those taking over are telling: The country’s top economic role is now to be held by Rodolfo Marco Torres. He was a brigadier-general who participated in Chávez’s 1992 coup attempt against the then government. The Oil Ministry is to be taken over by Chávez’s cousin, Asdrúbal Chávez.

Back in the square, I asked Ortiz if she was at least pleased that some changes were being made. “What shakeup?” she responded. “There will still be lines for flour, milk and sugar.”

Hopes for pragmatism have essentially been dashed. Those in the opposition are unimpressed but for Maduro, his biggest concern will be losing the support of people like Ortiz.

Yet, the pragmatic changes that Ramírez talked publicly about imposing would initially have been painful for poorer Venezuelans.

Some in 23 de enero remain behind the government, despite admitting problems.

“A shakeup is necessary in revolution,” said Zulema Sambrano, walking through the main square here. “Revolutions happen in stages. Things are evolving.”

For World Report, this is Girish Gupta in Caracas