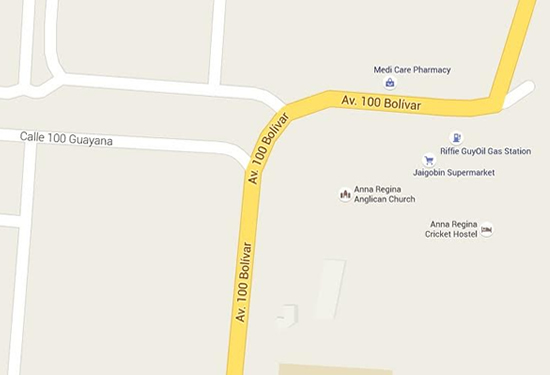 A centuries-old territorial dispute in South America has taken a technological turn as anglophone Guyana decries Google Maps' Spanish-language labeling of street names in a region claimed by neighboring Venezuela.

The contended English-speaking area, which encompasses two-thirds of Guyana and effectively functions as part of the former British colony, is at the heart of the long-standing dispute, recently revived after an oil discovery off its shores.

Roads in the sparsely populated jungle region are known locally by English monikers, but some appear with entirely different Spanish-language names on Google Inc's map service.

"It was brought to our attention that certain main streets on the Essequibo Coast were falsely branded," Prime Minister Moses Nagamootoo told Reuters, adding that Guyana would ask Google to remove the names.

It was not immediately clear whether the road names on Google Maps had been changed recently.

Neither Google nor Venezuelan authorities immediately responded to requests for comment.

The Essequibo region has long been denoted on Venezuelan maps as a "reclamation zone."

The dispute was revived in May after an offshore oil discovery by Exxon Mobil Corp in a potential boon for poor Guyana, whose economy relies heavily on rice, gold, diamonds and bauxite.

The Venezuelan leader's critics counter he is using the border dispute - as well as a more recent one with Colombia - to distract voters from high inflation, a severe recession and rampant crime.

Many in Guyana, a tiny nation of 800,000 people sandwiched between Venezuela, Brazil and Suriname on the shoulder of South America, feel their larger neighbor is seeking to lay hands on its newfound oil wealth.

"I can't say whether Columbus or some Spanish sailor stopped over for a peep, but that road was certainly not made and named by the Spanish," Alfred Bhulai, a Guyanese man who lives in the nearby region of Demerara, wrote in a letter to Guyanese newspaper Stabroek News.