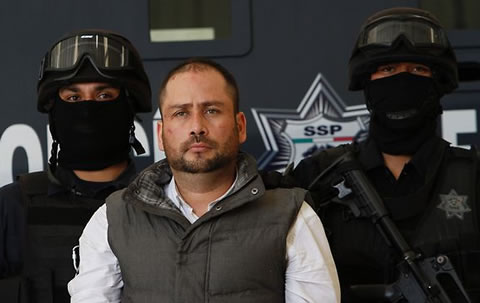 Mexican authorities have arrested the man who they claim is behind the majority of murders in the notorious border city of Ciudad Juárez over the past 15 months.

Arturo Gallegos Castrellón, 32, nicknamed El Farmero (the Farmer), is believed to be the leader of the Aztecas gang.

The group act as footsoldiers for the Juárez drug cartel in their turf war against the Sinaloa cartel, as both wrestle for control of the lucrative border city.

“[Mr Gallegos] is in charge of the whole organisation of the Aztecas in Ciudad Juárez,” Luis Cárdenas Palomino, the federal police chief, said. “All of the instructions for the murders committed in Ciudad Juárez pass through him.”

Mexican police often claim that those arrested have made various confessions. These are not easy to verify. They allege that Mr Gallegos admitted responsibility for “80 per cent of all homicides” in Ciudad Juárez since August 2009, including ordering the killing of a US consular official.

Lesley Enriquez Redelfs, a pregnant US consulate official, was killed in March alongside her husband for providing visas to a rival gang, according to investigators. Their seven-month-old daughter, who was in the back of their car, survived. President Obama vowed to “work tirelessly” to prosecute those involved.

Mr Gallegos has also been linked with an attack in January in which 15 people, mainly students, were killed at a birthday party in the Villas del Salvarcar district of the city. Gunmen had false information that guests were members of the rival Artistic Assassins gang, who work for the Sinaloa cartel.

The killings left the city in shock and psychologists were brought in to work with traumatised children. President Calderón visited the area, keen to show that his Government was committed to ending the violence.

Two associates of Mr Gallegos have also been arrested for smuggling weapons and drugs across the border into the US. Carlos Rodríguez Ramírez, nicknamed El 67, and Gisela Ornelas Nuñez, also known as La Maestra (the Master), were captured along with weapons, ammunition and marijuana.

The arrests represent a coup for Mexican authorities, as they attempt to demonstrate that they are making gains in their war against drug cartels in time for a visit to the country by Janet Napolitano, the US Homeland Security Secretary, today. She is due to meet her Mexican counterparts to discuss the Obama Administration’s commitment to combating terrorism.

This month two drug tunnels were discovered under the border between Tijuana, in Mexico, and San Diego, in California. One discovered last week was nearly half a mile long with an electricity supply and railway line.

More than 6,500 people have died in drug-related violence in Ciudad Juárez over the past two years, making it one of the deadliest cities in the world. More than 30,000 people have been killed in Mexico in the conflicts since Mr Calderón took office in December 2006.

Fatal toll
• At least 28,300 people have been killed in the Mexican drug war since December 2006
• 58 journalists and more than 1,000 police officers, judges and prosecutors have been killed
• 121,199 cartel members have been detained
Sources: El Universal; Times database