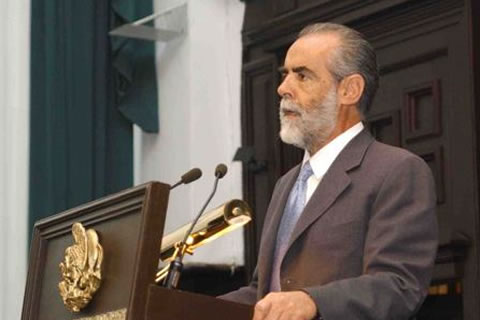 Confusion surrounds reports of the release of a prominent Mexican senator and congressman kidnapped six months ago.

Newspaper El Universal reported over the weekend that former presidential candidate Diego Fernandez de Cevallos was released on Friday after a $20m (£12.8m) ransom paid by his family. However, rival newspapers and the government claim that the former senator and congressman is still held hostage.

Fernandez de Cevallos, 69, disappeared May while driving to his ranch late at night near San Clemente in the central Mexican state of Queretaro. Kidnappers issued several photos of a bare-chested and blindfolded man since that have been identified as the politician by his nephew.

Nicknamed Jefe Diego, or Boss Diego, Fernandez de Cevallos was a major figure in President Felipe Calderon’s National Action Party (PAN). He came second in the 1994 presidential election himself and played a major role in the Party’s win in 2000 over the rival Institutional Revolutionary Party (PRI) which held power in Mexico for over 70 years.

Charismatic and often brandishing a cigar, the politician also ran a successful law firm that represented reputed drug lords as well as some of Mexico’s biggest businesses.

El Universal has sought to reclaim its reports of the release after rival newspapers discounted them by highlighting the veracity of its close family sources. "The information is direct and not to throw a curveball,” a nephew of the politician told the newspaper. “Fernandez de Cevallos is well. In a few days this will be officially confirmed."

Kidnapping of public officials and rich Mexicans for ransomis rife, though usually ends in the victim’s death. It is unclear who Fernandez de Cevallos’ kidnappers are. Leftist guerrillas have been blamed, rather then drug cartels.