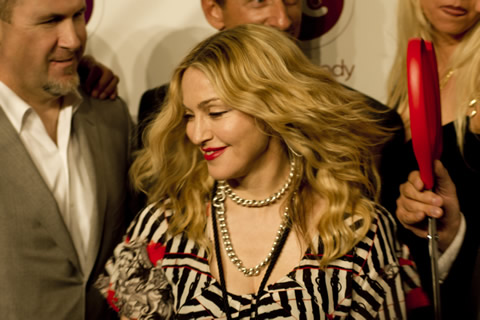 Madonna cut the ribbon at the first of her global Hard Candy Fitness gym-chain in Mexico City’s posh Bosques de Las Lomas region on Monday, while hundreds of fans watched on through a heavy security and police presence.

The star told fans she loved Mexico before joining the city’s Head of Government Marcelo Ebrard entering the gym, backed by the black and purple Warhol-esque murals of the singer that adorn the walls.

She told TV reporters how surprised she was at the number of fans present and revealed plans for a concert in the country either late 2011 or early 2012.

The high-end gym occupies 30,000 square metres over three floors in a very exclusive area of the city. It is the first of ten more expected to open in Russia, Brazil and Argentina as well as in Europe and Asia.

Membership will be 2,000 pesos (£100) a month. The one-off joining fee is 10,400 pesos (£535) which includes two months membership. Though hundreds of fans turned up to witness the opening, many were disappointed that they would not be able to afford the high rates.

"[Hard Candy] is a sexy name that gives you the opportunity to have fun and to build strength as far as the imagination will allow," Madonna said in a statement. "Our plan is to use Mexico as a place to fine-tune our brand and then expand it to other countries and, in the long term, develop a global brand that includes the United States.”