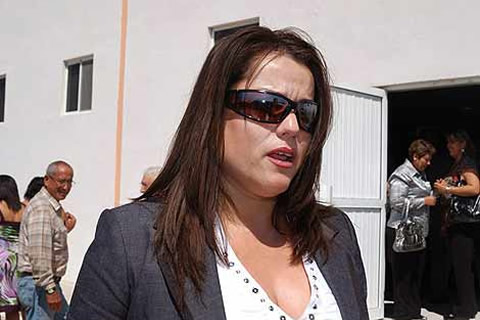 Hermila García, 38, the female police chief of a troubled northern Mexican town, has been shot dead as she drove to work less than two months after taking up her position.

She was named in October as head of Meoqui’s 90-strong police force but chose not to employ bodyguards or carry any personal weapons, often telling reporters: “If you don’t owe anything, you don’t fear anything.”

Miss Garcia was one of a number of women taking up the role as men shy away for fear of being killed.

Twenty-year-old law student Marisol Valles took the post in Praxedis, just 8km (5 miles) from Ciudad Juárez in October.
Her predecessor was killed in July 2009, leaving the post unfilled until October when Miss Valles stepped in.

Meoqui, located 360km south of the US border, is beginning to see some of the violence that is so rife in the state of Chihuahua, most notoriously in the border city of Ciudad Juárez.

Forty people have been killed in Meoqui this year alone, though this figure is dwarfed by the 2,500 killed in Ciudad Juárez this year.
The state also saw the discovery of 20 bodies in mass graves dotted around Puerto Palomas, 160km west of Ciudad Juárez, earlier this week.

Jorge Gonzáles, Chihuahua state prosecutor, said that the bodies of 19 men and 1 woman had been buried between four and eight months ago. However, the manner in which they died has not yet been determined as the bodies were badly decomposed. Authorities are still trying to identify the victims.

The discovery was made from information given to Mexican officials after the interrogation of five men detained for possession of marijuana.

With the visit this week to Mexico City by Janet Napolitano, the US Homeland Security Secretary, Mexican authorities have been keen to demonstrate to the Obama Administration that they are winning the fight against drug cartels.

A leader of the particularly violent La Familia cartel was captured in a second major arrest. José Alfredo Landa Torres, nicknamed El Flaco (Skinny), was alleged to be overseeing the area of Morelia, capital of Michoacán, for the cartel.

Ramon Pequeno, Federal Police anti-narcotics chief, said officers surrounded a house on Monday and captured Mr Landa and three others, along with an AK-47 and two handguns.

Mr Landa, 37, is the second member of the cartel to be captured since it issued a letter offering to disband in November. The 500-word dispatch appeared as fliers posted in telephone booths, hung as banners across streets and was sent to various news outlets.
In it, the cartel offered to disband on the condition that the government would take proper care of Michoacán’s citizens.

“Unlike the lax and inefficient stance the authorities have taken in eradicating thieves, rapists, drug traffickers, and kidnappers from our state, we are willing to fight,” the letter read.

Authorities ignored the letter, saying that they would not negotiate with drug cartels.

La Familia shot to fame in Mexico in 2006 when they rolled severed heads on to the dancefloor of a disco in Uruapan, Michoacán.
Authorities claim that the cartel is the country’s main trafficker of methamphetamine.

Mr Landa’s arrest follows that of Arturo Gallegos Castrellón, nicknamed El Farmero (the Farmer), over the weekend. He is believed to be the leader of the Aztecas gang, footsoldiers for the Juárez cartel. Police claimed that Mr Gallegos admitted responsibility for 80 per cent of deaths in the city since Augustlast year.

More than 31,000 people have died in drug violent in Mexico since President Felipe Calderón took office in 2006.