Drug cartel forced me to become a killer, says boy, 14 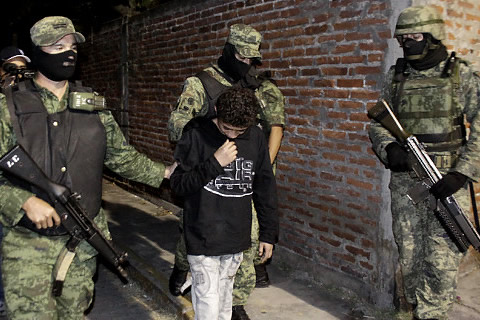 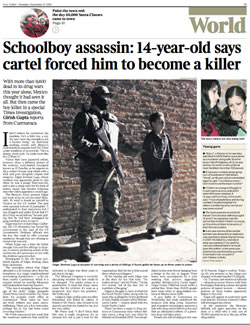 “I don’t believe he committed the murders. He’s a little boy, a kid. He can’t have the strength to kill a human being,” an individual working closely with Mexico’s most notorious assassin told The Times under condition of anonymity. “He’s a skinny, short child. He looks more like he’s 12 than 14.”

Videos that have appeared online, however, show a different picture of the scrawny, curly-haired youngster known as El Ponchis, as he appears to slit a victim’s throat, beat others with a stick and pose alongside corpses and weapons. Edgar Jiménez Lugo, whose moniker was apparently given to him when he was a podgy four-year-old, and is also a slang term for the beat of techno music, has become infamous since the videos appeared a month ago.

The Mexican Army arrested Edgar last week when he and his sister Elizabeth, 19, tried to board an aircraft to Tijuana on the US border. The pair were paraded in front of journalists. “I participated in four executions but I was drugged and under threat that if I didn’t they would kill me,” he said, adding that he had been kidnapped by gang members when he was 11.

Edgar was born in San Diego, California. His US citizenship has forced the involvement in the case of the US Government. Embassy officials met the boy this week to offer consular assistance, though they are refusing to reveal what was said.

When Edgar was a baby his father brought him and five siblings to Jiutepec, a cement-producing suburb of the central city of Cuernavaca, to live with the children’s grandmother.

Newspapers in the city have published reports of Edgar stealing cakes from classmates.

The secondary school that Edgar attended is a 20-minute drive from his hometown, in a rough neighbourhood overlooking shantytowns — a far cry from nearby Cuernavaca, which is a popular retreat for wealthy Mexicans and backpackers learning Spanish.

“This case is amazing because of the age of the child,” Judge Armando David Prieto Limón told the The Times from his juvenile court office in Cuernavaca. “Most cases we have are theft, robbery and some narcotrafficking. There are a few homicides, perhaps ten in the last three years, involving children.”

Mr Prieto announced last week that the maximum sentence that could be delivered to Edgar was three years in jail, because of his age.
The Mexican Congress is currently discussing whether the law needs to be changed. “For adults prison is a punishment. It must last many, many years. But for children it’s seen as a treatment. And that’s the problem,” Mr Prieto said.

Judges in high-profile cases are often threatened and killed by cartels. A friend of Mr Prieto, who refused to be named, said that she feared for his, and her own, safety.

Mr Prieto said: “I don’t think that this case is really dangerous for us because this kid is just a tool for his organisation. But I do feel a little scared about what could happen.”

At the hearing last week Edgar was in the dock for the first time. “He looked serious,” said Mr Prieto. “I think he’s scared, not of the law, but of members of the gang.”

There has been a surge in drug violence in Cuernavaca since Arturo Beltrán Leyva, a drug lord, was killed by Marines in December last year. Two decapitated bodies were found hanging from a bridge in the city in August. Their heads were accompanied by a note warning that anyone supporting another Beltrán-Leyva Cartel leader, Edgar Valdez Villarreal, would suffer a similar fate. More than 30,000 people have been killed in drug-related violence in Mexico since 2006.

A gun battle in Cuernavaca on Wednesday last week underlined the tensions with drug crime. Reporters and onlookers immediately assumed a link with drug cartels before police said that an attempted robbery of a jewellery shop had taken place.

Details are still emerging in the case of El Ponchis. Edgar’s mother, Yolanda, 43, was arrested in San Diego and charged with entering the US illegally.

On Thursday last week local tabloids — ubiquitous across Mexico with their front pages featuring corpses alongside pictures of naked women — showed pictures of three bodies apparently linked to the child.

Edgar will appear in court early next year and the Attorney-General’s office will investigate his crimes.

In the meantime the Mexican tabloids will again speculate on the story of a child who is only one of 35,000 reported to be in the pay of the drug cartels.

* “Abdul”, a Filipino in his twenties, admitted in 2009 that he was trained as a murderer along with 30 other boys in the Philippines. At 12, he was sent by his family to kill a political rival. He killed more than 100 people

*Children as young as 8 fought in Chad’s national army until 2007, when 400 were released. A 12-year-old from Faya, in the north, said: “I had a Kalashnikov and during combat I fought alongside the others. Combat became normal so I was never scared”

* The Nazis manned an entire SS Panzer Tank Division with boys aged 16 and 17. As casualties rose the authorities drafted children as young as 12 and found them to be some of their fiercest soldiers

* A six-year-old would-be suicide bomber was dressed in an explosive vest and told to attack Afghan forces in 2007. He failed to understand what was wanted of him and the vest was defused before he could push the button. In the same year, another boy was forced by gunmen to behead a man accused of anti-Taleban activity