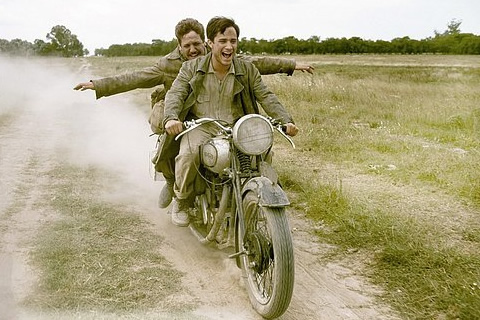 Immortalised in The Motorcycle Diaries, Alberto Granado, the travelling partner of Che Guevara, has died in Cuba at the age of 88. The pair travelled the length of South America on a motorbike in a trip that sewed the seeds of Guevara’s politics, which went on to transform much of Latin America and make him the most iconic revolutionary of the twentieth century.

Granado had bought the 1939 Norton 500 motorbike for the eight-month trip which he and Guevara would begin in late 1951. Naming it La Poderosa (the Mighty One) in irony at its debilitated state, the then students worked their way north from Argentina, taking in the east coast of South America all the way up to Venezuela. Granado stopped off there and used his skills as a biochemist to treat leprosy patients while Guevara continued on to Miami.

Less than a decade later in 1959, Guevara would help Fidel and Raul Castro lead a revolution that overthrew dictator Fulgencio Batista in Cuba, which is still run by the younger Raul, having taken over from Fidel in 2006 following his ill health.

Both Granado and Guevara kept diaries of the journey that were later published. They were used as the basis for Walter Salles’ 2004 film, The Motorcycle Diaries. The film follows their journey, highlighting Guevara’s horror at the poverty he encounters while demonstrating how his political ideas develop while travelling through Chile, Peru, Colombia and finally into Venezuela.

“The trip made us aware of poverty and wealth,” Alberto told the BBC for a 2005 documentary entitled ‘My best friend Che’. “The most important thing was to realise that we had a common sensibility for the things that were wrong and unjust.”

In Chile, the pair are shown in front of a fire with a couple forced from their homes because of their communist beliefs. The travellers feel guilty when forced to admit that they are not out looking for work, rather on a pleasure trip. Guevara later becomes angry towards the owners of a copper mine as they refuse the thirsty workers water.

At Machu Picchu in Peru, the politics underlying the film comes to the fore, as Guevara expresses disappointment that the civilization capable of building the ancient city were wiped out by those who built the ugly capital city Lima. Granada suggests a peaceful revolution across the continent to which Guevara quickly responds: “A revolution without guns? It will never work.”

They volunteer at a leper colony, hoping to make use their academic skills. Guevara is unhappy at the segregation of the sufferers and medical staff by a river. The pair refuse to wear rubber gloves as they shake hands with the lepers and Guevara famously swims across the dangerous river, despite his asthma, to join the lepers.

Guevara was himself killed in Bolivia in 1967 as he attempted to lead a revolution there. His death cemented his romantic place in history, with Alberto Korda’s image of the revolutionary, wearing a beret above long, unkept hair and a holding a pensive gaze into the distance, came to make a pop-culture icon of Guevara.

He was portrayed in the film by Gael García Bernal while Rodrigo de la Serna played Granado. It won numerous awards including a BAFTA for Best Film not in the English Language.

Granado moved to Cuba in 1961, taking up a post as Professor of Biochemistry at the University of Havana, before a long career as a distinguished academic.

He was notably absent at the film’s premiere at the Sundance Film Festival in January 2004, having been refused entry to the US. “It's always easy to blame the imperialists,” he told an interviewer, “but maybe we didn't ask for the visa in time. I would have loved to have been there.”

Granado’s ashes are due to be spread across Cuba, Venezuela and Argentina.