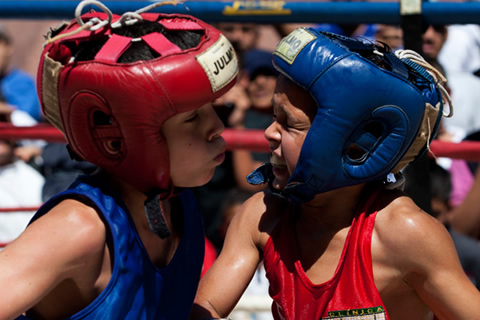 Training in a community hall in Caracas under a roof of corrugated iron, nine-year-old Erick Villanueva pounds punchbags and fights even younger opponents than himself in preparation for the ring. Skip related content

At his debut fight, the boy stares out his rival in sporting rage, impressing an audience of hundreds at a makeshift outdoor boxing arena in a backstreet of the Venezuelan capital.

Despite being larger, the other child timidly dodges Erick's powerful punches.

Erick had no interest in boxing until his home in a Caracas shanty town was destroyed in storms that swept across Venezuela's coastal areas and made nearly 140,000 people refugees across the nation late last year.

He was evacuated to a shelter in a local stadium.

There he found a boxing gym and fell in love with the sport, which is being promoted by a government initiative—"Olympic Street Boxing"—designed to pull in boys and girls from the streets of one of the world's most crime-ridden cities.

Exuding pride as a local radio station interviews her son after he wins his first fight, Erick's mother said she was apprehensive that her son might be hurt, but happy that his behaviour and academic performance had improved along with his boxing.

"He was always a good kid...and he has improved a lot," Lisett Marcani said, stroking her son's hair.

In Caracas, Erick is safer in the ring than out of it.

Young people from the slums are easily caught up in the drugs and gangs that make the South American nation's capital one of the world's crime hotspots.

Caracas is as dangerous as some war zones with a homicide rate estimated by NGOs at around 118 per 100,000 residents.

President Hugo Chavez's socialist government has poured money into sports projects, and the boxing initiative is intended to promote discipline and respect in a region that has produced boxers such as Panama's Roberto "Hands of Stone" Duran, and Cuba's Teofilo Stevenson.

Though not a traditional boxing nation, Venezuela has produced some champion boxers, notably Edwin Valero who held the World Boxing Council (WBC) lightweight title and was known for the image of Chavez on a Venezuelan flag tattooed on his chest.

"The support of street boxing is in the national drug plan," said Duarte Galvani, director of the National Anti-Drug Office (ONA) which is one of the initiative's sponsors.

"We hold events on the street so that kids see it and become motivated to join in the initiative."

Much of the training takes place in a gritty part of west Caracas called Propatria, not far from a square where the poor dig through rubbish, looking for something of value.

Coach Peter Marquez said entry to the programmes was not complicated, requiring only will and commitment from the boys, and the girls also involved. "The desire to be someone, do something in life," he said.

Jose Luis Rodriguez is 14 years Erick's elder and one of the coach's favourite boxers.

"Boxing has taught me self-control. Now I study and have learned to help myself," Rodriguez said. "Spiritually, I feel and look healthier."