Venezuela: The Limits of Control 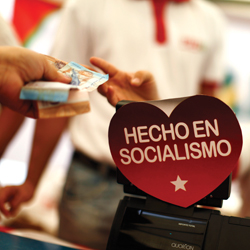 Having fired the starting pistol for the 2012 presidential race, Hugo Chávez must persuade the population of Venezuela that his government is on top of the many problems his country faces.

With food prices up 37% in the past year, Venezuelans are being hurt by inflation, which sits at 29% for the 12-month period through to February – the highest among the world’s top 42 emerging economies.

Inflation numbers will worry Chávez as he struggles to manage the country’s fraught economy, which analysts expect only to flounder this year – and some even predict that Venezuela could default on its debt obligations in 2012.

After setting a dual exchange rate of Bs2.6/$ for priority goods and Bs4.3/$, the so-called petro-dollar rate, for non-essential items in January 2010, the government this January eradicated the priority rate. This effectively devalued the currency for the second time in 12 months. It was the fourth devaluation since 2003, when Chávez introduced currency controls to prevent capital flight.

Chávez’s animosity towards the private sector has done nothing to curtail the phenomenon. “You’ve got the drive towards Chávez’s socialist programme, which has involved a lot of nationalizations,” says David Rees, emerging market economist at Capital Economics. “This isn’t very good for the general business environment. Foreign investors have been turned away, and it’s put off fresh investment, so that’s been the spark of capital flight.”

The problem of inflation stems from a lack of production in the country, coupled with government price controls and its tight grip on foreign exchange.

“If you are setting price controls, exchange controls, expropriations, confiscations, you create a very conflictive business environment,” says Boris Segura, a senior economist at Nomura. “Inflation is ingrained in the Venezuelan psyche. There is very little the government can do now; people don’t want to produce.”

The government has a severe lack of US dollars to sell at official rates; the central bank limits purchases to $50,000 a day. Companies, therefore, have been forced to curb imports.

At the time of the January 2010 devaluation there were reports of government officials threatening vendors if prices were raised. The same rules are thought to apply with the more recent devaluation. While these bullying tactics will not prevent a high inflation figure in 2011, they will defer the effects for a few months.

When this devaluation finally trickles down into the pockets of Venezuelans, analysts predict an up to 40% inflation rate in 2011 – nearly double the government’s target of 23–25%. “This year is going to be 30% at least; that’s my floor,” Segura says.

The foreign exchange controls have spawned a black market economy. With rates of up to Bs9/$, vendors are setting prices based upon the black market rate – with the addition of hefty margins – while often using either the official rate or the Transaction System for Foreign Currency Denominated Securities (SITME) rate, which sits at Bs5.3/$.

This implicit exchange rate, encouraged by the government, is meant to attract vendors away from setting black market-backed prices. The SITME market was established last June as authorities cracked down on the black market. To force the exchange rate mechanism, Venezuelan authorities are selling bonds to be bought in bolívars and sold in US dollars.

However, as with many Venezuelan-government solutions, it is a quick fix, according to Rees. “Although SITME seems to have an average of Bs5.3/$, the reality is that when these bonds are sold on the open market, the rate is even worse than that,” he says. “It is, in effect, a backdoor devaluation, which will certainly help to keep inflation up.”

Analysts are predicting yet another devaluation is due in the coming months. The SITME rate is expected to hit Bs6.5/$, according to Alejandro Grisanti, an economist at Barclays Capital in New York, and many other analysts surveyed by Bloomberg earlier this year.

State-oil company Petróleos de Venezuela (PDVSA) is the lubricant that keeps the country’s economy running, keeping it safely out of the realm of hyperinflation.

PDVSA may be rewarded by the spill-over of the turbulence in the Middle East. With crude prices hitting $107 a barrel, the value of Venezuela’s exports – 95% of which are oil – are set to rise. Extra funds will allow PDVSA to fund imports, lowering supply problems and temporarily slowing inflation. Rees predicts oil prices to hit $120 a barrel in the near future, though he expects a fall over the next year or so.

PDVSA, however, is not run as a business. “You cannot use the framework you use for a normal country when talking about Venezuela’s inflation,” says Segura. The oil company is used primarily by Chávez as a cash cow for social projects, from literacy to food. Petrol prices in Venezuela are some of the lowest in the world thanks to a $1.5 billion annual subsidy provided by the government.

“Know this: every time you fill a tank of gas, the government is subsidizing 90% of what that gasoline actually costs,” Chávez told viewers of his weekly TV show Aló Presidente! recently. Cutting the subsidy would be political suicide and so is out of the question so close to an election. The subsidies are also reaching across borders into China, for example. Since 2008, Venezuela has borrowed $12 billion from China, which is being repaid in subsidized oil shipments, slashing PDVSA’s revenues by 20%.

It is also difficult to ascertain the facts behind PDVSA’s figures. While it claims output is around 3.1 million barrels per day, these figures are widely disputed following years of underinvestment. Independent estimates by the International Energy Agency reckon that oil output fell by around 5% in 2010 to less than 2.2 million barrels.

Corruption is another difficulty for the Venezuelan authorities and ultimately its population, according to Carlos Romero, a political analyst at the Central University of Venezuela. “With the government trying to control prices by itself, there is going to be more opportunity for corruption,” he says. Officials are able to offer better US dollar rates in return for political favours.

“The important point is this,” says Romero. “You must see the link between the inflation rate of a country and its political decay.”