Dark side of the City's secretive new giant 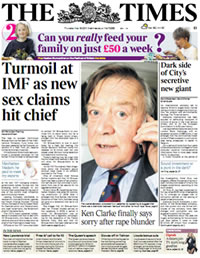 An international company set to become Britain's largest stock market listing is mired in allegations of corruption, tax evasion and environmental damage, The Times has learnt.

Glencore International has been accused of defrauding taxpayers of millions of euros in the most serious bribery plot to hit the European Commission in its 50-year history.

Just days before Glencore lists on the London Stock Exchange, with an expected valuation of £38 billion, it has emerged that the commodities trader is one of fifteen suspects in a corruption case being prosecuted in secret in Belgium.

For a period of more than four years a Glencore subsidiary is alleged to have procured lucrative market-sensitive information from a mole deep inside the EU bureaucracy.

A Dutch Eurocrat at the centre of the investigation, Karel Brus, was allegedly offered thousands of euros in cash, holidays, cases of wine by the alleged conspirators, according to the court papers.

Mr Brus, 61, has been suspended on full pay since 2003 while investigators try to untangle an alleged web of corruption centred on the leaking of cereal prices and quotas.

Glencore Grains Rotterdam, a subsidiary of the Swiss-based company, and one current and one former employee of the company have been charged with corruption and are expected to stand trial this year.

The revelations about the case are hugely embarrassing for the company just days before it looks to raise $11 billion (£7 billion) from investors.

Glencore's flotation will create five billionaires and at least 480 multimillionaires in what has been described as the biggest wealth creation exercise in history.

The commodities trader will go straight into the FTSE 100 index of leading companies, requiring most large pension funds and investment managers to hold its stock. That means millions of people with pensions or ISAs will own a small part of Glencore.

"Many will want to be sure that a company with a history of sanctions busting and trading with pariah regimes has reformed its ways," one City analyst said.

The Times launched an investigation looking at how the company operates in Colombia, Zambia, Russia, China, Belgium, Switzerland and the UK. In addition to the European bribery case, the findings included:

Glencore's Colombian subsidiary is operating on government-owned land that was forcibly taken from the previous residents by paramilitaries. At least 18 people were murdered in a sixmonth campaign of terror against the residents of El Prado in the north of the country;

more than 30 MEPs will present a petition to the European Commission next week calling for a moratorium on European financing of mining projects in Africa after tax-avoidance allegations against Glencore in Zambia. Glencore has denied these allegations and said that it paid the correct amount of tax in Zambia;

Glencore's environmental protection has been questioned after it emerged that two of its metals plants in Zambia are consistently exceeding limits for sulphur dioxide emissions. The failings are detailed in a report by a mineral expert included in the company's listing prospectus. Sulphur emissions can cause respiratory diseases and create acid rain that destroys vegetation.

Brief details of the Belgian case were contained in the prospectus issued by Glencore this month for its public flotation.

But court papers seen by The Times show the full extent of the plot that threatens to embarrass the company and undermine the European Union's much maligned Common Agricultural Policy.

Glencore is alleged to have received information during a four-year period from 1999. In 2002-03, the alleged fraud helped the company to earn more than €7 million from the EU budget, according to court papers.

Mr Brus, the Eurocrat at the centre of the affair, is alleged to have passed market sensitive details to Glencore Grain Rotterdam, a fellow Dutch cereal company Codrico and a French agricultural body. As a trusted senior member of the Commission's agriculture department, Mr Brus was able to obtain and transmit market-sensitive decisions to his paymasters, including Glencore, giving it a decisive advantage over its rivals, it is alleged.

It is also alleged that, during a 20-month period, at least 3,178 calls were made from a mobile phone given to Mr Brus by his Glencore handlers — conversations that investigators believe included the leaking of sensitive information.

The Belgian Federal Prosecutor and the Commission declined to comment yesterday on the case, which was initially reported by the French radio station France Inter. Glencore said that details of it were in its prospectus and declined to comment further.

The affair has thrown unwanted light on the company as it prepares for its huge flotation. Glencore was founded in 1974 by Marc Rich, at one time the world's most wanted corporate criminal, and it has grown rapidly since. Once floated, it will be six times bigger than Marks & Spencer and more than twice as big as BT.

Glencore will be only the third company to go straight into the FTSE 100, making it a British blue-chip with access to the vast capital resources of the City of London.

The company is owned by 485 of its employees and they will reap enormous rewards from the flotation. They will have average stakes worth more than £67 million each while a handful of senior executives will join the ranks of the world's richest people.

Ivan Glasenberg, the chief executive, will have shares worth £6 billion and four of his colleagues will become billionaires. Some of these men are barely in their forties, such as Alex Beard, the head of Glencore's London office, who is 43 and will be worth more than £1.7 billion.

Glencore has generated its wealth by moving metal, coal, oil and grain from source to market. It uses its market intelligence to buy at the lowest price and sell at the highest. For example, if coalmines in Queensland have to shut down because of heavy rain, the sudden supply shortage will cause coal prices to rise. If Glencore's traders can be the first to know of problems in Queensland, they can buy coal in Indonesia and take advantage when the price rises.

Everything at Glencore is geared to being the first to know about world events. This has created a highly competitive and secretive culture, as traders jealously guard their intelligence from rivals.

In the 1980s, Glencore realised that if it directly owned mines or farms it would be able to take advantage of these sorts of situation even faster and the company has been acquiring assets from Colombia to Congo ever since.

But this is a very expensive strategy because billions of pounds have to be sunk into a mine before it starts producing returns. It has become increasingly difficult for Glencore's partners to fund the scale of development needed so they are seeking new capital by listing their shares.

Much of the £7 billion that will be raised in the flotation will be used to expand mines such as Prodeco, a huge coalmine in Colombia.

About 18 per cent of Glencore's stock will be sold to investors initially with the primary listing in London and a secondary offering in Hong Kong. Investors will be buying into a company that has proved itself a brilliant trader but also one with a poor reputation in mining.

Senior executives from some of the world's largest mining companies have told The Times they believe that what some regard as the fast-and-loose attitude at Glencore is not conducive to the focus on environmental protection and worker safety required by miners.

Analysts who know Glencore attribute this attitude to the culture created in its early days by its founder Mr Rich.

Is this a sound investment ...

Glencore is the world's largest commodity trader and, as such, is the leader in a highly profitable field.

Its activities span the globe, which means that the company's decision to float on the London Stock Exchange is a huge coup for the City and for Britain.

This immensely profitable company controls almost two thirds of the world market in zinc, half of the market in copper and nearly a quarter of the aluminium market, along with important positions in other sectors including oil and grain.

Glencore's profits are not only huge, they are growing, because of its unique exposure to booming demand for commodities from emerging markets such as India and China. Brokers predict that, during the next two years, earnings will more than double to $12.9 billion (£8 billion).

Floating on the stock market will allow Glencore to grow even more rapidly in the future. It will have currency — its shares — with which to take over other businesses.

Glencore has a highly regarded management team that, after the flotation, will have a lot of money tied up in the company. Ivan Glasenberg, the chief executive, will own just under a sixth, and has pledged not to sell a single share.

Glencore's staff are also brave, going into countries where others fear to tread, such as investing in Colombian mining 15 years ago when the country was being torn apart by the drug trade. Its influence in such places can be a force for good.

If you think, as many do, that demand for commodities is only going one way, this is a company to which you need exposure.

The company has a murky past. Its origins lie in Marc Rich & Co, the trading house set up by Marc Rich, the controversial American tycoon who traded with apartheid-era South Africa and faced accusations of tax evasion, racketeering, conspiracy and trading with Iran in contravention of US sanctions before he was pardoned on President Clinton's last day in office.

Glencore arguably still retains the ruthless culture that Mr Rich engendered, of pushing things right up to the borders of legality.

The company has always been exceptionally secretive and, although listing on the public markets obliges it to be more transparent, it is asking a lot for this particular leopard to change its spots.

This secrecy has prevented City investors from getting a handle on Glencore's prospects.

Glencore's governance is patchy, to say the least. Lord Browne of Madingley, the former BP chief executive, decided not to become its chairman at the eleventh hour amid reports that he felt that it was not a business with which he felt comfortable. It then opted for Simon Murray, a man who has lived outside Britain for 45 years and whose social attitudes date back farther than that. The other directors are far from independent.

This is a business with dubious morals. It trades grain amid food riots and has been accused of profiteering and environmental offences in numerous poor and war-torn countries.

Most of those signing up to buy shares in Glencore's flotation are major Middle Eastern and Far Eastern investors.

Few of the traditional City institutions will touch the shares with a bargepole.

The question is, should you?

1974 Marc Rich, below, founds a trading company with money borrowed from his father-in-law

1979-81 Fifty-three American hostages are held in Tehran. The US imposes sanctions on Iran but Rich continues to trade Iranian oil

1983 Rudy Giuliani, US attorney for the Southern District of New York, indicts Rich on 51 counts of tax evasion, racketeering, fraud and trading with the enemy. Rich becomes a fugitive in Switzerland

1994 Rich gambles on the zinc market and loses. He is forced to sell his company to its management, who rename it Glencore

2001 Rich is pardoned on the last day of Bill Clinton's presidency, causing controversy as Rich's former wife is large donor to the Democrats

2002 Ivan Glasenberg becomes chief executive. He joined the company in 1984 as a coal trader. His Glencore shares are now worth $9 billion

2002 Xstrata lists in London with a market value of £2 billion. Xstrata was spun out of Glencore in 1999 and is now valued at £42 billion