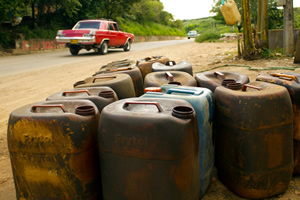 In a dusty field just over the border in Colombia, Venezuelan drivers wait at a line of wooden shacks full of jerrycans to have their gas tanks emptied and the fuel sold on.

Having filled up minutes earlier in Venezuela, the smugglers stand to make up to 4,000 percent profit on a single trip thanks to the disparity of gas prices between the two nations.

While soaring pump prices are a worry for many in the West, the streets of Venezuela remain dominated by four-wheel-drive vehicles and old American gas-guzzlers running on the world's cheapest fuel—around 2 cents per liter (7.5 cents per gallon)—thanks to generous subsidies.

Taxi driver Ricardo can buy 50 liters (13 gallons) of petrol for about a dollar in San Antonio, a small border town in Venezuela. Pulling up to a tarpaulin-covered shack in Cucuta, on the Colombian side, he is then able to sell it for nearly $40.

Middlemen then sell the fuel to hundreds of vendors openly lining the streets of Cucuta every day, while the town's few legitimate service stations are empty.

Fuel smuggling is just one of many illicit activities on the lush and mountainous Venezuela-Colombia border, which for decades has been riddled with drug trafficking and activity by Colombian guerrillas and paramilitaries.

"In this region, we have illegal oil, drugs and some legitimate business. But the profit is made in illegal oil," added Nunez.

Nowhere is that better illustrated than on the Simon Bolivar International Bridge—named for South America's independence hero—that is the main border crossing.

Queues of primarily old American vehicles with their large gas tanks flow across day and night, as many in the region rush to make their own profit from the trade.

Analysts, however, put the real cost at around $21 billion annually given lost potential profits.

As the bankroll for Chavez's socialist "revolution" and with ambitious investment plans, PDVSA can ill afford lost income, even though global oil prices are riding high.

But low fuel prices are a sacred cow in Venezuela, especially since a 1989 rise caused fatal riots known as the "Caracazo."

Rather than cut the subsidy, which would be political suicide for Chavez, he and Oil Minister Rafael Ramirez are pushing hard to persuade Venezuelans to cut domestic use.

Yet it is a hard sell.

"The subsidy is why domestic consumption of gasoline in Venezuela only goes up. Nobody has any incentive to save on gas use," Segura added. "This is a Catch-22 ... Nothing will happen."

It is not only the economy that is affected.

Socialist Chavez is among the most vocal critics of the West and "criminal capitalism" for failing to curb climate change, yet in his backyard streets are gridlocked with vehicles spewing out fumes encouraged by his own subsidy.

At the border, connivance and bribery have long been rife, but local authorities insist they are trying to stamp down on the fuel trade.

In November last year, they implemented a system to automate gas sales, relying on a chip in vehicles to track the number of times they fill up their tanks.

The system was recently suspended, however, after the discovery of fraudulent chips on the market for around $20.