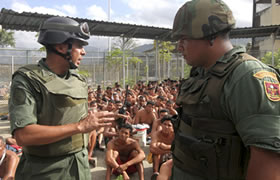 GUATIRE, Venezuela — A violent prison siege is continuing into its sixth day, with dozens reported killed as more than 5,000 troops attempt to regain control of El Rodeo jail after violence between inmates has escalated to what have been described as “Dante-esque” proportions.

The National Guard has formed a 1-kilometer cordon around the complex, which is just east of the capital Caracas. Hundreds of primarily female family members and friends remain in tears outside it, clueless as to what’s going on inside.

Many, like Betsy Oviedo, whose 20-year-old son is incarcerated in El Rodeo, believe that authorities are massacring the prisoners in order to take control.

“There are too many deaths, too many that they have killed, burned and slaughtered,” she said, distraught and standing just outside the National Guard cordon. “We are all here waiting for them to tell us if our relatives are dead or alive.”

Violence erupted at the prison earlier this month with a nine-hour shootout between inmates that left 22 dead, according to official figures. The real death toll is thought to be three or four times that.

Carlos Nieto Palma, a lawyer and university professor specializing in human rights who also runs the NGO Window to Freedom, says he visited a morgue last week and counted 68 bodies from the jail.

“This makes this one of the most violent events to have occurred in a Venezuelan jail in the past 10 years,” he said. “We face a truly serious prison crisis in which the state has not shown up with solutions and this has led to chaos.”

No one is certain of the cause of the violence, which could be simple escalating rivalries. The situation inside undoubtedly perpetuates violence between gangs as weapons and drugs are readily available to inmates.

Thousands of troops on Friday stormed the prison to disarm the inmates, leading to the current violence. In the latest incident, official figures claim one prisoner and two National Guard troops have been killed.

However, a different story is being told by videos and pictures that have begun to surface on the internet. One inmate with a mobile phone told the Associated Press of 17 dead inside, adding to reports from some leaving the prison of at least four bodies beginning to decompose. Mobile phone images and videos appear to corroborate the rumors.

Another prisoner told Venezuela’s Globovision that security forces were preparing to commit a massacre inside the jail. “They want to finish off El Rodeo II,” he said. “They want to kill everyone.”

Sunday morning saw hundreds of prisoners evacuated from the site in Metrobuses, which normally act as public transport for the residents of Caracas.

Clad in red, the prisoners all hunched over as the buses tore through the crowds as their wives, mothers and girlfriends screamed in anger and despair, not knowing whether their loved ones were on board or among those still inside.

The prison is known to be one of the most notorious in Venezuela. Built to house 750 people, it is packed with more than 3,500. “It's a totally Dante-esque situation,” Humberto Prado, who helps run the Venezuelan Prison Observatory NGO that tracks prison violence, told Reuters [3].

Gang leaders are thought to be in control of the inmates, and they are believed to have contact with their previous criminal networks outside the prison. They are able to do this thanks to the slack laws on contraband getting through the prison’s perimeter.

Corruption is rife in Venezuela’s public sector. Contraband includes not only mobile phones but also weapons — AK-47s, machine guns and hand grenades. “This is a big business run by an internal mafia,” said Nieto Palma, the lawyer and university professor.

The government claims to have brought part of the complex, El Rodeo I, under control, saying it has seized automatic rifles, other guns and thousands of rounds worth of ammunition as well as 45 kilograms of cocaine and 12 kilograms of marijuana.

Prisons across Latin America are often run by the prisoners themselves, with guards left to ensure just that the perimeter is left secure. This inevitably leads to trouble, like that at El Rodeo, and such massacres are nothing new.

One of the worst crises took place in 1994 when about 130 inmates were burned or hacked to death with machetes at the Sabaneta prison in Maracaibo. Uribana prison opened in 2000 and was billed as a modern jail. On a single day in January 2007, 18 prisoners lost their lives in a violent gang battle for control of the jail.

Last year, 476 inmates died in the country’s prison system, according to the Venezuelan Prisons Observatory. The country’s 30 prisons are designed to hold 12,500 but in reality house just under 50,000.

The siege is playing its part in Venezuela’s fraught political process too. Deputy of the ruling United Socialist Party of Venezuela (PSUV) Carlos Escarra suggested that there may be “links” between the opposition and gang leaders inside the jail. A commission has already begun investigating these as yet unsubstantiated allegations.

Opposition politician Tomas Guanipa of Primero Justicia described the government’s management of prisons in its 12 years in power as “an insult to the Venezuelans.”