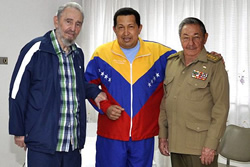 (Reuters) - The guessing game over Venezuelan President Hugo Chavez's health took new twists on Tuesday with rumors ranging from a possible takeover push by his brother to a homecoming by the end of this week.

Chavez's disappearance from public view since a June 10 operation in Cuba has convulsed the volatile and politically polarized South American OPEC member of 29 million people.

Utterly dominant on Venezuela's political stage since 1999, the 56-year-old has put in place sweeping socialist reforms including the nationalization of large swathes of the economy in the continent's biggest oil exporter.

He has said he will stand for re-election next year. But now some are asking if he can make it to the vote.

The government says he had surgery for an abscess in his pelvis and is recovering fine. But it has given no more medical details nor a clear timetable for his homecoming.

That, combined with an almost complete silence from the normally garrulous and ever-present president, has led to speculation he may have a much more serious problem.

"We are not going to comment on rumors, lies and falsehoods. The president is recovering well and we will have him here soon," Information Minister Andres Izarra said in the latest official rebuttal of speculation.

Well-known Venezuelan journalist Nelson Bocaranda reported on Tuesday in the opposition-leaning El Universal newspaper that Chavez had lost 22 pounds (10 kg) and was taking only liquids at Havana's Cimeq hospital during treatment for prostate cancer.

Despite that, Bocaranda said, quoting unidentified medical sources, the president has an 80 percent chance of survival and plans to return on Friday for more treatment in Venezuela.

Other local media also quoted army sources saying Chavez would be back in time for a military ceremony on Friday.

One new rumor is that Chavez's older brother Adan, governor of the Andean state of Barinas and an ideological mentor to the president, is preparing to try to take the reins should the seat of power be vacated.

Outraging the opposition, Adan Chavez was widely quoted over the weekend as citing a phrase by Argentine revolutionary Ernesto "Che" Guevara that the "armed struggle" was a legitimate means of winning power if elections failed.

U.S.-based intelligence think-tank STRATFOR said Adan and other factions may begin positioning themselves to fight for succession if Chavez's situation does turn out to be serious.

"Though Adan is someone the president is more likely to trust, he would have difficulties building broader support," STRATFOR said in a report, noting that he, like other senior allies, lacked the president's charisma and national appeal.

Should Chavez be incapacitated, Vice President Elias Jaua would in theory take over for the rest of his six-year period, until January 2013 under the constitution.

Such talk, Chavez allies say, is absurd and destabilizing.

Bond traders have so far viewed the possibility of a major health problem for Chavez positively, assuming it would lead to a transition of power to a more market-friendly government.

Some analysts, however, say that could be wishful thinking given that a Chavez demise could usher in a period of chaos for Venezuela, as his allies and the opposition jostle for power.

A deadline of sorts is looming on July 5 when Chavez would love to be home for a regional summit and the 200th anniversary of Venezuela's independence. Some media reports say he is arguing about those plans with his doctors in Havana.

One theory doing the rounds is that Chavez is deliberately allowing the furor to build so he can fly home triumphant to the acclaim of supporters in a political deus ex machina.

The coffee-swilling and baseball-loving president has always been a shrewd handler of his own image, ensuring high popularity levels, most recently hovering at about 50 percent.

In his absence, ministers look somewhat bemused and the opposition has continued to fail to articulate an alternative beyond bashing the government for its handling of the saga.

"This way of handling information is typical of totalitarian regimes," opposition legislator Maria Corina Machado told Reuters. "It shows a lack of responsibility and bravery at a crucial time for all of us."

That followed a 2.8 percent rally of that bond on Monday.