* Rumors have swirled about his health 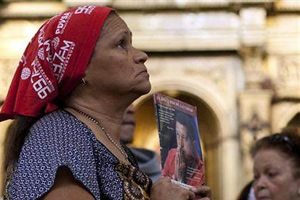 CARACAS, June 28 (Reuters) - From Caracas shantytowns and churches to lunch lines at "socialist" food outlets, supporters of Venezuela's President Hugo Chavez are praying and waiting for his safe return from Cuba.

At the Santa Capilla church just a block from his Miraflores presidential palace, security guard Williams Rengel said it has been much busier since the firebrand leader underwent an operation in Havana on June 10.

"Those praying want prosperity for the people and want things back to normal," he told Reuters.

"He's our president and thanks to him we have houses and so much. Apart from that, he's also a human being," he said.

Chavez, 56, bases his popularity with Venezuela's poor majority on what he calls a long-overdue "revolution" to close a yawning gap between incomes in a nation that combines huge natural wealth with high unemployment.

But his absence from public view since the surgery has turned the country's already volatile political scene on its head and triggered a host of rumors that he may be much more ill than has been admitted. For full coverage [ID:nCHAVEZ]

Jimmy Olvas was playing dominoes with friends on a street near the church, where walls are plastered with giant murals of the former soldier alongside fellow revolutionaries including Argentina's Ernesto "Che" Guevara and Latin American independence hero Simon Bolivar.

"All the churches of this country are praying for Chavez," he said, nodding toward Santa Capilla as the boisterous group of men shouted and slammed their pieces down on the table.

"We pray for him to return quickly and to recover fast."

Chavez's supporters accuse his rivals of cynically rejoicing over speculation about his health and wishing for his death because they cannot beat him at the polls.

While opposition leaders have sought to avoid the impression of exploiting the situation, many anti-Chavez Venezuelans have been privately rubbing their hands in glee.

"I don't wish anyone dead, but I wish him long gone out of our lives and our country," said one Caracas resident and former Chavez supporter, who asked not to be named.

"He should just stay in Cuba—forever!"

The saga has raised concerns at home and abroad and underlined the absence of any clear successor to Chavez, who has dominated Venezuelan politics since he won power in 1999 and nationalized large parts of the economy.

A few blocks from the church at one of his headline grabbing initiatives—a low-cost canteen selling the national dish, "arepa" cornmeal flatbreads filled with meat or cheese—diners have few doubts he would be home soon.

"Our ministers are doing a good job and our Comandante will be back," says pensioner Pedro Torruloc below a big picture of Chavez and a poster proclaiming the advantages of socialism.

Lining up for his lunch, Torruloc points out that the western media have repeatedly buried Chavez's close friend and mentor, former Cuban leader Fidel Castro.

"Remember that Fidel has been killed thousands of times," he said with a chuckle. "If the opposition don't have Chavez, they go crazy. Without Chavez they're nothing because they have nothing to talk about."