* Some supporters in denial over cancer confirmation

By Girish Gupta and Brian Ellsworth 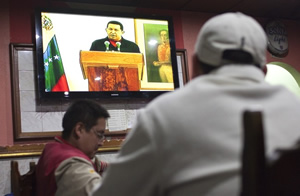 CARACAS, June 30 (Reuters) - Supporters of Venezuelan President Hugo Chavez on Thursday reacted with dismay and denial to news he had suffered cancer—but vowed to continue advancing his self-styled revolution as he recovered.

"This is a lie, Chavez does not have cancer, I don't know why he said it but it's not true," said Luis, a worker painting a wall in a downtown Caracas plaza.

"We don't have to be afraid. Cancer is a disease that can be treated," said Javier, a waiter. Neither gave surnames.

Supporters, who for two weeks had been condemning the cancer rumors as an opposition smear campaign, looked overwhelmed as they watched Chavez's grave speech.

Chavez's ministers came out immediately with a joint television appearance to pledge loyalty and unity.

"There is no time for sadness, but for reflection and bravery, Vice President Elias Jaua said. "Unity is what is needed at this moment. Let's show our support for our President Chavez on the streets."

He urged Chavez supporters to show their solidarity in massive street rallies called for coming days to commemorate 200 years of independence from Spain.

"Comandante Chavez is recovering and is very strong!! Everything will be cured, there is no doubt. He looks strong and everything has been removed," Golinger said on Twitter.

There was no immediate word from Venezuelan opposition leaders. But some "anti-Chavistas" reacted immediately on Twitter with snide comments. "If Chavez goes, Venezuela will be rid of cancer," wrote one within minutes of the speech.

Under Chavez's rule since 1999, Venezuelan society has become deeply polarized and strongly insulting language between both sides is common.