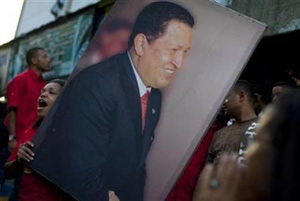 (Reuters) - Venezuelan President Hugo Chavez's supporters rallied and prayed on Sunday for the speedy recovery of a man whose cancer has rattled the country he has dominated for more than a decade.

In bread shops and bars, streets and homes across the volatile South American OPEC member, there is only one topic of gossip and debate: just how bad is Chavez's health?

Dozens chanted "We love Chavez!" at a service in the capital's largest slum, Petare. At a downtown square, thousands of red-shirted supporters danced, sang, waved flags and held puppets of Chavez aloft in a lively show of support.

"I see you, I hear you, I live through you!" Chavez tweeted in appreciation from Havana, Cuba where he is receiving treatment after surgery to remove a cancerous tumour.

"He is going to emerge victorious. We all ask God to give him health and strength," said pensioner Irma Santander, 76, sporting the red colours of diehard "Chavistas".

An atypically sombre and reflective Chavez shocked Venezuelans when he admitted last week he had cancer.

The 56-year-old socialist is one of the most globally recognizable figures thanks to his flamboyant anti-Americanism and self-styled "revolution", which has projected his left-wing views across Latin America and the world.

Only Chavez, his doctors and closest allies may know if the malignant cells have spread or been stemmed, with speculation he may have colon cancer and face months of chemotherapy.

The implications are immense: Chavez has no obvious successor, and an opposition browbeaten by him since his first election win in 1998 is sensing a chance in next year's vote.

Opposition leaders and critics are trying to avoid any accusations of exulting in his misfortune.

But they are nevertheless angry he has not named a temporary successor during his nearly month-long stay in Cuba and are quietly excited about the spectre of a power change.

"I feel a real dilemma inside. I hate what he's done in Venezuela and I've always opposed him," said housewife Jenny Rodriguez, at a posh hilltop sports club right opposite a slum in a typical example of Venezuela's social divide.

"But I don't wish death or physical suffering on anyone, that would be wrong before God. I'd prefer him to get better—then lose the election fairly, as he would anyway."

Even if he recovers perfectly, Chavez's health crisis already looks like a game-changer for the nation of 29 million people. It has exposed the lack of replacements, dented his aura of invincibility and given encouragement to his opponents.

"Venezuela cannot be governed from a hospital in a foreign country," said one opposition leader, Antonio Ledezma.

Anxious allies insist their 'comandante' remains an active president and there is no need to temporarily name Vice President Elias Jaua, who is the face of government at home.

The constitution requires a delegation of powers to the vice president if there is an "absence" of 90 days, or 180 if the assembly uses its prerogative to extend that period.

But officials say the clock has not started running because Chavez is still signing decrees and giving instructions to ministers, some on trips to Havana.

Latest images of Chavez—released by state media in a slightly surreal drip-drip of photos and footage reminiscent of Cuba's handling of former president Fidel Castro's illness—showed him engaging in a mock sword fight with his foreign minister, both of them brandishing large tropical seed pods.

The images, from Friday, showed Chavez talking animatedly and wandering, presumably through the garden of Havana's Cimeq hospital, hand-in-hand with two of his daughters.

There was still no word when Chavez might be home.

"He will come when his doctors say it is time," Jaua told Reuters at preparations to mark the 200th anniversary of Venezuela's independence from Spain, a celebration on Tuesday that Chavez would dearly love to attend.

Chavez's health saga has displaced from the front pages a litany of issues facing his government, from power blackouts and uncontrolled crime to jail riots and housing shortages.