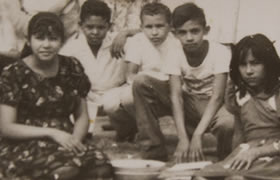 Lourdes Urquiola sits outside his small concrete home in the hamlet of Los Rastrojos, on Venezuela's scorching plains of Los Llanos, occasionally spitting out a brown tobacco paste popular with locals.

Opposite him is the patch of land where Venezuelan President Hugo Chávez grew up. Mr. Urquiola has lived there all his life and proudly describes the Venezuelan president as like his own son, having been Mr. Chávez’s father’s best friend. “He was a good son, always a companion to his father, going fishing and walking with him.”

Now, Urquiola is anxious about Chávez’s treatment for cancer in Cuba, praying for a return to good health. “I ask God to save him,” he said.

Though the outspoken, confrontational Chávez is still subject to broad criticism outside his country, many in the small village offer him their unflinching support. So too in the neighboring town of Sabaneta, where Chávez later moved with his elder brother Adán to live with their grandmother Rosa Inés. Ms. Inés lived in a mud hut covered by palm leaves.

“He used to run around these streets playing with friends,” said Flor Figueredo, whose own house is just opposite that of Inés’. “He was a very active boy.” The retired teacher describes a humble family. “And look, now we have the president,” she says with a smile.

Ms. Figueredo shows off sepia-tinged photographs which depict the young Chávez with classmates. One shows him around eight or nine years old, wearing a cap and white T-shirt in front of a giant map of Venezuela.

In the bustling state capital of Barinas, an hour’s drive from Sabaneta through maize and sugar cane fields, school nurse Ana Márquez de Mejías sits outside the modern-looking Liceo O’Leary secondary school. Though elderly, she is still animated when talking about the young Chávez who studied there before heading to Caracas. “He was an intellectual from the beginning," she says.

Ms. Marques de Mejías has no concerns that Chávez will not return to full health. “God has given his blessing to the president of Venezuela!” she says with clear excitement.

But not all residents of Barinas are so forthcoming with their praise of Chávez. Unemployed electrician Javier Moreno sits beneath a bust of nineteenth century independence hero Ezequiel Zamora – a childhood hero of Chávez – in a city square. Mr. Moreno complains that the ruling family has forgotten its roots.

“If Chávez is a revolutionary and wants equality, his family would live like us in the barrios, without a car and breaking their backs every day to eat,” Moreno says, despondent. “They don’t live like that!”

Moreno, who has been without work for four years, believes the government has a part to play. “The revolution has its good and bad points. It serves some and not others. Today, if you want to find work but you're not a government supporter, you're screwed.”