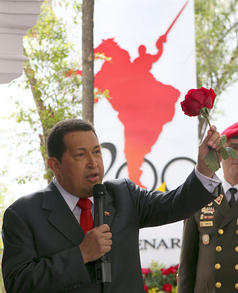 “THEY ROBBED US OF THE VICTORY GOAL!” screamed Venezuelan President Hugo Chávez’s Twitter account on Thursday morning, as Venezuela were knocked out of the Copa America after unexpectedly making the semi-finals.

As Mr. Chávez underwent his first phase of chemotherapy last week, he appeared to be keen to ensure that Venezuelans knew he was in charge – and eccentric statements like that are his modus operandi.

The firebrand socialist seems to have learned from the mistakes of last month, as an uncharacteristic three-week silence sparked speculation, compounded by his own ministers whose statements were confused and contradictory.

Their ubiquitous leader was missed and, thankfully for him, no one was able to fill the vacuum. This time around, there would be no vacuum to fill. “During the course of this week I have not lost focus on Venezuela for an instant,” Chávez said as he arrived back in Caracas on Saturday night.

His primary method of keeping up that appearance is Twitter. The maverick leader posted more than 50 times during his week away as he underwent medical treatment, spurring on the country’s soccer team, making budget statements, and alluding to his “great battle,” but without being specific as to why he was getting treatment.

Chávez is the face of government, and his public relations skills are second to none. Supporters hardly talk of their love for the party but, rather, their unflinching love for Chávez, the man. That fire has been kept burning for more than a decade by Chávez’s ubiquity on television, radio, and the streets of Caracas.

And so the night before the 228th anniversary of the birth of Latin American independence hero Simón Bolívar – the man that Chávez has sharply focused his Bolivarian revolution on – Chávez arrived back in town, ready to pose for pictures outside the Liberator’s house the following morning.

“Day of the fatherland, of the sublime birth!” read the Twitter account. “Sing for the eternal Simón Bolívar!”

Statements like this divide the already volatile and polarized political scene in Venezuela. But for Chávez’s supporters, they give evidence that he is one of them, a man with concerns similar to their own about the subjects that matter to them. His methods enrage the opposition who see them as more hot air from the man in charge of their government.

Chávez appears healthy back in Caracas, though with another phase of chemotherapy coming up, the days and weeks before will likely be filled with images of a healthy and successful leader, ready to win the other “great battle” before him – presidential elections in 2012.

In an interview published Monday, Chávez said that he hasn't "for an instant thought about withdrawing from the presidency."