Venezuela unable to determine cause of Bolivar's death 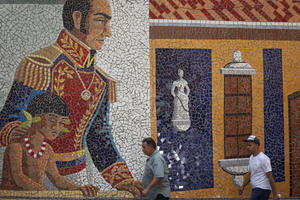 A year ago this month, forensic specialists exhumed the body of Venezuelan independence hero Simón Bolívar in a fanfare ceremony broadcast live from a Caracas mausoleum. The late-night show featured narration from Interior Minister Tareck El Assami to the background of the country’s national anthem.

The spectacle was thanks to President Hugo Chávez, whose own controversial Bolivarian revolution is inspired by and named for the 19th century liberator and who, contrary to the traditionally held view that tuberculosis killed the revolutionary, sought to prove that in fact Colombian oligarchs murdered Bolívar.

Now the results of the forensic analyses are out, and they are inconclusive. “We could not establish the death was by non-natural means or by intentional poisoning. None of those who say this could prove it,” said Vice President Elías Jaua, in a ceremony aired across Venezuela.

Bolívar, who liberated South America from Spain, is not the only leader whose demise has received attention recently in Latin America. An autopsy on the body of former Chilean president Salvador Allende, who died in 1973 as tanks and aircraft bombed his presidential palace, has confirmed suicide. The news has put to rest significant questions on the death of the continent’s first democratically-elected socialist leader who was ousted in a coup and replaced by the US-backed dictatorship of Augusto Pinochet.

But the exhumation in Venezuela has been controversial. Bolívar is revered across Latin America, considered by many as South America’s George Washington for his role in liberating Venezuela, Colombia, Ecuador, Peru, and Bolivia, which is named after him. But he is especially idolized in Venezuela, or more precisely by the Venezuelan leader. Squares featuring his statue are the centerpiece of every Venezuelan city. The socialist leader’s speeches – which often run for hours, notably on Alo Presidente!, the president’s weekly chat show – are littered with references to him. Venezuela officially changed its name to the “Bolivarian Republic of Venezuela” when Chávez came into power in 1999.

To many, the exhumation merely underscored an obsession of Chavez to be considered a modern-day Bolivar. (Indeed, Cuba’s Communist Party newspaper Granma described the Venezuelan president as a “Bolívar of these times,” earlier this month.) Chavez was lambasted by his opposition for spending the money to carry out the year-long investigation when Venezuela is suffering under inflation, electricity woes, and crime. Some have gone so far to say that Chávez’s recent illness is a curse bestowed upon him for opening Bolívar’s casket in the first place.

Those opponents might find satisfaction in the forensic results. But the president is not backing down, at least not for now. “I think they murdered him,” he said. “I don't have proof, I don't know if we will have, but those are the circumstances.”