Published by Reuters and Scientific American 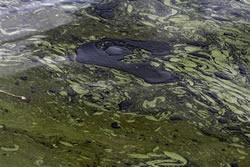 Venezuelan fishermen inspect their catch of blue crabs on the edge of Lake Maracaibo, concerned about the greasy oil stains covering their shells.

The crustaceans will be processed and shipped to seafood restaurants in Maryland and New York where they are considered a delicacy. But scientists and fishermen in the state of Zulia in northwestern Venezuela worry that the crabs may not be safe for consumption.

"The crabs are stained with oil," said fisherman Cesar Burgos as he weighed the day's catch in the fishing village of Barranquitas. "I don't know at what point it becomes harmful."

Pollution in Lake Maracaibo has been a problem for decades. In recent weeks the area has been blighted by several leaks from tangled pipes, corroding pumps and other oil installations that crisscross the lake.

"The main source of contamination by hydrocarbons is the oil industry," said Lenin Herrera, a chemical engineer and former president of the Institute for the Control and Conservation of Lake Maracaibo (ICLAM).

"If there is a discharge of oil, that does damage to important ecosystems in the lake."

The blue crabs—whose Latin name Callinectes sapidus means beautiful, savory swimmers—are distinctive for their violet-blue legs and claws. They are famed for their succulent, sweet taste.

Though not popular in Venezuela, 95 percent of the creatures will be shipped to the United States, where the best of the white jumbo lump meat sells for up to $40 per pound. Fishermen surrounding Lake Maracaibo will earn around $0.23 for each crab they catch.

The fishermen often sell the crabs to local middlemen who then send the product to one of the 19 processing plants in the area, often at double the price.

The plants hire hundreds of staff to separate the meat before it makes its way to the dining tables of U.S. restaurants.

In addition to the environmental problems, fishing techniques are also thought to be harming the crab population. In 2002, fishermen began using longline methods rather than traditional small mesh cages to catch the crustaceans.

The new method, which does not discriminate by size, has doubled production but is threatening the future of the crab population.

"There has been a very strong increase of individuals caught that are under the minimum legal size," said Dr. Glenys Andrade de Pasquier, an investigator at the National Institute for Agricultural Investigation (INIA).

When immature crabs are caught it stunts population growth.

Feelings against President Hugo Chavez run high in Zulia, an island of opposition in the socialist nation. Locals blame his government for turning a blind eye to pollution by the oil industry.

"The government could do so much but it does nothing," said Eliseo Fermin, deputy of the legislative council of Zulia state. "What the government has done with the lake is a terrible crime."

There is little recent research into the wellbeing of Lake Maracaibo, which critics suggest is due to a lack of funding by the government which is eager to downplay the pollution as Chavez looks to win his fourth term in power in next year's presidential election.