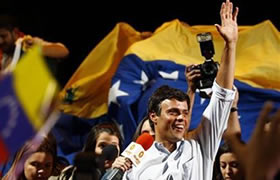 Venezuela's opposition will take a team approach to defeating President Hugo Chavez in next year's election, said candidate Leopoldo Lopez whose campaign may be blocked by the government over corruption allegations.

Chavez, 57, has led South America's top oil exporting country since 1999 and changed the constitution to allow indefinite re-election. But his hopes for a lengthy rule were thrown into doubt by a cancer diagnosis this year.

Centrist candidate Lopez celebrated with his supporters on Friday when the Costa Rica-based Inter-American Court of Human Rights announced its decision that he should be allowed to run for president despite objections from the government.

In an interview with Reuters he vowed to win the opposition's February primary and go on to use a team approach to confront Chavez in the October, 2012, election.

"I'm going to win the primaries and then we will be in a huge alliance with the rest of the opposition. We will put together a force to achieve victory on October 7," he said.

But the 40-year-old former mayor also left open the possibility of accepting a smaller role as the opposition tries to unite to end Chavez's 12-year-old rule.

"I'm committed to being part of that team, in whatever position I'm designated to play," he said.

Chavez, who is undergoing chemotherapy, vows to recover and be ready to take his campaign to the streets early next year.

ACCUSED BUT NOT TRIED

The rights court is part of the Organization of American States, or OAS, and its decisions are supposed to be binding. But Venezuela's government said the Lopez ruling was politically motivated and it may still keep the Harvard-educated politician out of the presidential campaign.

Lopez says human rights are at the heart of his policies.

Polls show him toward the top of an opposition field led by Henrique Capriles Radonski, a state governor who promises to emulate Brazil's "modern-left" policy model if elected.

Lopez made his name as mayor of the wealthy Chacao district in Caracas. He was favored to win the mayoralty of the whole city in 2008, but was blocked by Chavez's comptroller general.

Accused but not tried for corruption, Lopez was barred from seeking public office until 2014. He says the accusations are trumped up and called it unconstitutional to suspend him from politics without a trial.

Despite rampant crime, low private investment and one of the world's highest inflation rates, he remains Venezuela's top politician, with approval ratings of about 50 percent.

Lopez told Reuters that taking concrete steps to cut the country's high homicide rate will be a main priority.

"All Venezuelans live in fear," he said. "The great contrast will be that between promise and results."