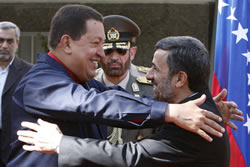 Venezuelan President Hugo Chávez is set Saturday to host his Iranian counterpart, Mahmoud Ahmadinejad, in a state visit likely to further sour relations between Venezuela and the United States.

President Ahmadinejad's visit is his first since the US slapped sanctions on Venezuelan state oil company PDVSA, due to its ongoing trade with Iran. And the trip comes immediately after he sparked a walk-out at New York’s UN General Assembly meeting on Thursday when he called the Sept. 11, 2001, attacks "mysterious" and a pretext for the US to invade Afghanistan and Iraq.

Mr. Chávez himself is no stranger to controversy in the UN's New York auditorium. In his 2006 speech at the Assembly, Chávez stood at the lectern the day after former US President George W. Bush had, and said, “The devil came here yesterday,” while theatrically sniffing the air. “It smells of sulfur still.” Chávez then made the sign of the cross before clasping his hands in prayer and looking to the roof of the auditorium. The Venezuelan leader went on to describe Bush’s “domination, exploitation, and pillage of the peoples of the world.”

Recent leaks of cables by whistle-blowing organization WikiLeaks reveal growing frustration in Washington with Chávez’s anti-US rhetoric in recent years. One cable describes Chávez’s repeated “vitriol” against President Barack Obama, in one instance cursing at him on national television.

Chávez was unable to attend this week's General Assembly meeting, as he underwent his fourth round of chemotherapy in Cuba. He arrived back in Caracas just before midnight on Thursday. “Successful results, satisfactory results, all the vital signals,” he said, speaking to cameras on the tarmac of Caracas’ main airport. “We have finished the chemotherapy cycle.” He can now begin preparation for presidential elections due on Oct. 7, 2012.

Venezuelan authorities have been keen to at least show a façade of willing friendship to the US, though always with a dig. Authorities in Caracas announced on Thursday that Chávez had played a key role in the release of two US hostages held in Iran, having been caught hiking on the border in 2009 and accused by Iran of spying. Speaking to Reuters, Deputy Foreign Minister Temir Porras said that Chávez had persuaded his Iranian counterpart to release the men in a “respectful, diplomatic, discreet move,” which he compared to the “arrogant” demands of US authorities. The two hikers flew out of Iran this week.

Relations are not warm, however. The US hit Venezuela with oil sanctions in May, in response to its continued trade with Iran. This prompted further vitriol from the Venezuelan government. “We’ll sell oil to whoever we want to. We don’t need money from gringos,” said Venezuelan oil minister Rafael Ramírez.

The sanctions, however, were largely seen as toothless, as they had no sway over Venezuela’s oil sales to the US, which account for 45 percent of the Latin American country’s total. Boris Segura, an economist at investment bank Nomura in New York, described the sanctions as “fairly inconsequential.” Chávez has, on a number of occasions, threatened to cut oil supplies to the US.

Chávez has also spoken against US involvement in events in Libya, praising Muammar Qaddafi as “the liberator of Libya,” and denouncing the rebels as “terrorists.” He has also said that NATO’s sole aim in bombing the country is to seize the country’s oil wealth. “It's the excuse to intervene and seize a country and its riches,” Chávez said.

Mr. Ramírez is currently languishing in a French jail and achieved notoriety primarily for his hold-up of a 1975 OPEC meeting in which more than 60 people were taken hostage and three killed. He continued to mastermind killings and dramatic hostage-seizures against Western targets.

Mr. Maduro told state television that authorities remain in contact with the 61-year-old, who faces “very difficult circumstances in France.”

Chávez has corresponded repeatedly with with Ramírez, calling him a “revolutionary fighter.”