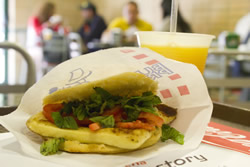 Nearly every morning locals line up alongside a street kiosk for arepas, corn flatbread stuffed with a jumble of meats, vegetables, and cheeses. The Venezuelan specialty has been a source of pride here since the Spanish tried to usurp native corn centuries ago with European wheat. “Arepas are part of our culture,” says Miguel Segovia, clutching a greasy paper sack filled with a warm arepa.

But whatever the political bent of the arepa, Venezuelans will remain loyal.

“The arepa will never be lost,” says Adriana Vilar, a librarian at the Center for Gastronomic Studies in Caracas.