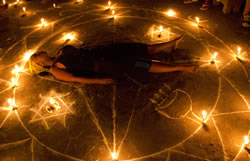 The jungle air is thick with cigar smoke and pierced by an occasional scream as drums beat, people chant and candles flicker illuminating bodies squirming.

Empty whisky bottles strewn across the ground are also a part of the ritual which is hundreds of years old.

"I still feel very cold thanks to the presence of the dead," said Ana Maria Caraya, who remembers her 15-minute trance as a dream. "I fell asleep. I feel nothing more."

The 25-year-old is one of thousands of believers in the cult of Maria Lionza, who is thought to have been born in the 16th century and was the daughter of an Indian chief.

Her followers travel to the jungles of the Sorte mountain in Venezuela's Yaracuy state for one week each October looking for healing and protection.

No one is certain about the origins of the cult, which includes aspects of Catholicism and African worship, or the number of followers. Estimates range from 10 percent to 30 percent of Venezuela's population.

Official believe about 20,000 followers, from Venezuela, the Americas and even Europe, descend on the mountain in October.

Caracas-born Eloy Parra is the medium who led Caraya in her trance, channeling the spirit of a 10th century Viking explorer who is now saint for the cult.

"What we're doing here is cleaning her aura with candles so she does not encounter earthly obstacles," said the 34-year-old, who was wearing only beads and shorts.

"Maria Lionza is the greatest thing we have here in Venezuela," she added.

Followers of the cult believe their chosen saint will possess the body of the medium who entices the follower into a trance in which they often speak in tongues or harm themselves.

Maria Lionza is known by members of the cult as La Reina or the queen. Angelina Pollok-Eltz, a former professor of anthropology at the Andres Bello Catholic University in Caracas who has written a number of books about the cult, said it began in the Sorte mountains in the early 1920s and was brought to Venezuela's urban centers a decade later.

"The majority of the believers are members of the lower classes," she added.

The latest trend is the worship of saints dedicated to the thugs that plague the streets of one of Latin America's most crime-ridden countries.

"The cult of Maria Lionza is like a mirror of Venezuelan culture and society," said Wade Glenn, an anthropologist at Tulane University in the United States.

"Whenever there is a significant change in the cult, we must ask ourselves what is occurring in Venezuela to cause such a change," he explained. "People use Maria Lionza as a coping mechanism for life's hardships, as a form of survival."

Wade believes that estimates of the number of members who take part in the rituals may be much higher.

"I am confident in stating that minimally 60 percent of the population or more has at some level participated in the cult of Maria Lionza."