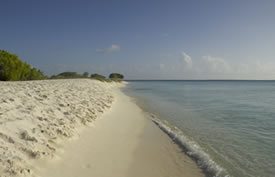 Tourists from around the world sunbathe on the white sands of Francisqui, occasionally jumping into the turquoise Caribbean waters just off Venezuela's coast.

The beaches of the Los Roques archipelago – in which Francisqui lies – are some of the most idyllic in the world, and luxury yachts owned by international businessmen sit moored off the coast.

But the wealthy Venezuelans and foreign tourists who enjoy Los Roques may have their paradise spoiled.

President Hugo Chávez announced in October his intention to seize the yachts and expropriate property on the islands to be used for state tourism.

"Expropriating a boat is completely absurd," says Venezuelan factory owner Javier Álvarez, waist-deep in the water by his 74-foot yacht. "I don't see how they can take away something which you've worked hard for and have bought."

Government expropriation of private industry has been a key policy of Chávez's regime.

More than 450 companies have been expropriated this year alone. ExxonMobil, which had its assets seized in 2007, is still fighting the Venezuelan government for $7 billion in compensation it believes it is owed.

The money demanded in compensation is taking its toll on Venezuela's economy, as Chávez plans to increase spending nearly 50 percent next year to drum up domestic support before next year's presidential elections.

The crystal-clear ­waters attract divers from around the world, while the white-sand beaches are one of the few luxuries on Venezuela's Caribbean coastline.

The islands were made a national park in 1972, for fear that the land would be overtaken by developers. But privately owned posadas, or inns, still dot the islands, and it's those lands that Chávez is eyeing now.

"[Chávez's] policy is just to try to hurt the rich people," says Diego Arria, a former minister of tourism who was president of the corporation of hotels and tourism at the time of the park's formation.

Mr. Arria has been personally hit by the government's expropriation policy. Last year, his ranch in Yaracuy was seized by authorities.

Just a five-minute boat ride away from Francisqui is the archipelago's main island, Gran Roque.

On it is a small landing strip, littered with small planes owned by wealthy businessmen, as well as the posadas that house the high-end tourists.

Many of these are owned by Italians who ventured to Los Roques over the past 20 years.

"I feel the owners are scared," says one manager, unwilling to reveal his name for fear of reprisal.

He claims that many owners are ensuring their documents are in order so that the government has no excuse to come down on them.

Owners across the island echoed the manager's sentiments, though refused to do so on record, fearing they would be targeted.

Not all the posada owners are foreigners or concerned about the expropriation.

Magalis Rodriguez moved to Los Roques from the nearby island of Margarita more than 40 years ago and is a proud supporter of Chávez, the "Comandante."

"I have great confidence in President Chávez," she says. "He is the only president who has put Los Roques under a magnifying glass."

But the posada owners, whether foreign or local, are not the only target of Chávez's campaign.

Across the water from Gran Roque are the holiday homes of Venezuela's elite on Madrisqui island.

Visited just two or three times a year, the properties are a symbol of the "bourgeoisie" in Venezuela that Chávez wants to eliminate.

Rumors are spreading quickly around the island that the houses on Madrisqui have been emptied of their contents in a last-ditch attempt to salvage whatever their owners can before any expropriation.

Armando Loynaz, an island administrator, dismissed the rumors. "The primary concern," he says, "is mass tourism."

Many on the island share his concerns for the environmental impact that may follow if large numbers of Venezuelans flock to those shores following the expropriation.

The warm water, plethora of wildlife, and stunning corals attract divers from around the world, whereas much of the rest of the coast is littered with empty beer cans while a mix of pop and reggae blares from cars parked on the sand.

In order to prevent the same thing from happening here, German tourist Katrin Bender says some sort of regulation is needed. "At the moment, the regulation is money. If Chávez takes that away, you need a different way of controlling the numbers."

"You see things here that you don't see in other places," says one diver, not wanting to be named for fear of reprisal. "What's going to happen to the coral? We already have lots of problems with global warming. It's a beautiful place, but we need to be careful."