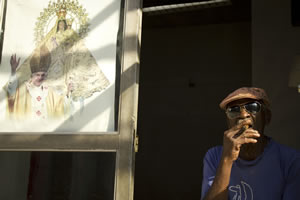 Former Cuban President Fidel Castro is to meet with Pope Benedict XVI today after a mass in Havana's Revolution Square. The last-minute meeting marks the end of the pope's visit to the communist island that banned religion after the 1959 Revolution.

Fidel Castro wrote on a government website late last night that was happy to meet the pope, "as I did John Paul II, a man for whom contact with children and the humble raised feelings of affection."

The Vatican already stated the pope would be happy to meet with Fidel. Last night he met with President Raúl Castro, Fidel Castro's younger brother, urging the leader to allow a bigger role for the Catholic Church in Cuba and asking him to make Good Friday a national holiday. Christmas was reinstated as a national holiday just ahead of Pope John Paul II's visit to Cuba in 1998.

The pope made several humanitarian requests, according to the church, possibly including pleas for the release of American Alan Gross imprisoned in Cuba on charges of spying.

Fidel Castro remains excommunicated from the church for his treatment of priests and nuns, who were thrown off the island after the revolution, as well as the government's seizure of church property.

On his flight to Latin America on Friday, the pope said that Marxism "as it was conceived, no longer corresponds to reality," and hinted at change, Reuters reports. "New models must be found with patience and in a constructive way," he said.

This pleased some dissidents, hoping to use the papal visit to amplify their own discontent. However, they may be disappointed with the latest news of the meeting between the pope and Fidel Castro, which offers the Cuban leaders legitimacy.

Berta Soler, leader of Las Damas de Blanco (Ladies in White), a group protesting political arrests, says she asked for "just a minute" with the pope. The Vatican denied the request, saying he would be too busy. She was horrified that Fidel Castro would meet with the pope.

"We are marginalized, repressed, and the church must hear and protect us," she says.

In a curt response, Marino Murillo, vice president of the council of ministers, said, "In Cuba, there won't be political reform," reports Bloomberg. Vatican spokesman Father Federico Lombardi said, "We know it is a long road and that the history of Cuba is complex."

There is the potential for one more surprise. Venezuela's President Hugo Chávez is in Cuba now for radiation therapy. He will no doubt be eager for a picture with two important men: the leader of more than a billion Catholics around the world, as well as the iconic figure in Mr. Chavez's Bolivarian Revolution across the water.

Several hundred thousand people are expected at today's mass at the shrine of Cuba's Revolution.