Inside South America's Most Notorious Jail 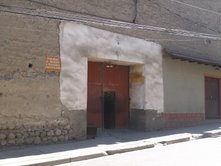 “Don’t worry. He’s not going to hurt you. He’s only a murderer,” former drug-trafficker S told me as I peered into a punishment cell. I began to laugh but my face dropped as I realised the lack of sarcasm in what he had said.


I had voluntarily entered one of South America’s most notorious jails having heard rumours about it for the last few weeks. San Pedro is unique in that it is not the prison guards who are in charge there but the prisoners themselves. As S later said, “This door,” pointing at his cell door, “is not to keep me in, but to keep the guards out.” Like every other prisoner, he held his own key.


Earlier that day, I had walked up to the gates of San Pedro and asked the guards if I could have a look around.


“Of course, come in,” they said. Surely it couldn’t be that simple. I hesitated.


“Do you want my passport? Some money?” I offered.


When asking locals the best way in, as a tourist, my favourite response was: “It’s easy. Just walk in with your passport.” But I had heard many more elaborate replies that involved scamming the guards in some quite ingenious ways. I decided to play it by ear.

Taking up an entire side of Plaza San Pedro, the unmarked, muddy stone building has only two entrances. The main one, I later found out, was for South American visitors. It was watched over by half a dozen heavily armed guards. To the left, however, was a small side entrance. I chanced it with this one, mainly due to the lack of weaponry on display, and I struck lucky as this was the ‘tourist’ entrance.

I carried on towards the prison bars where I saw a small square with kiosks, selling fast food and drinks, in each corner. A man in a yellow t-shirt waved me over.

“Do you want a tour?” he asked in perfect English. His name was O, a Bolivian. He tried to persuade me that it was safe. He showed people around all the time, he claimed. I could see no other tourists, however.

I knew that the prison guards had, once, allowed tourists to wander around quite freely with prisoner guides (for a bribe, of course). After the publication of a book about the place, however, the government had cracked down (in the soft way that only the Bolivian government can) by putting up a sign proclaiming, “No Turistas.”

Still the only tourist, O began to persuade me that I’d be okay. The guards nodded in agreement. No way would I be allowed to take my camera in, though, they told me. “Pagaré más. I will pay more,” I said. No, was still the reply. I’d have to leave a few hundred pounds worth of photographic equipment with a corrupt Bolivian police force. I handed it over, half not expecting to see it again. It would be an interesting call to my insurance company.

I was escorted through the gates and up to S’s ‘cell’ by O. S was a fast talking, foul mouthed South African with a huge head of hair and a beard to match. The ‘entrance fee’ was dutifully collected by a lady called L, whose purpose seemed solely to be a verbal punch bag for S. The money would go straight to the guards, she claimed. They later asked for donations to the section ‘foundation’ which helped foreigners who had no money and helped maintain the area. Remember, prison officials did nothing to this end. I later learned that this ‘foundation’ was most likely L and S’s pockets.

I was in the Posta section, reserved for foreigners and rich Bolivians. It had once been the sector for the richest of the rich including the continent’s most powerful drug barons and its highest ranking politicians who would have champagne breakfasts in the square I had seen earlier. J, who I would later meet, would revel in the fact that he had bought his cell—you buy your cell; you are not assigned one—from a prisoner who had dined regularly with Pablo Escobar, the Colombian drug lord immortalised in the Mark Bowden book and later film, ‘Killing Pablo’.

The cells are not cells at all but rooms that are favourably comparable to those in La Paz that many backpackers stay in. S and L were watching wrestling on their crystal clear cable TV connection. They claimed to have hot water twenty four hours a day, a rarity on the continent. S even joked that here was the only place in South America that you could flush toilet paper down the toilet.

Whether true or not, this was no third world prison in the expected sense. I asked whether S considered San Pedro a punishment. “I spent three years on death row in Pakistan,” he replied. “That was a punishment.” President Musharraf had personally pardoned him, he claimed. Unfortunately for S, he had been caught again, trafficking 5 kg of cocaine on the Bolivian border.

S had prolonged his stay in San Pedro by claiming not to speak English or Spanish, only Afrikaans. There was no way the Bolivian government were going to bother finding him a translator. 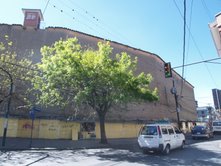 
He explained that Posta was very different to the other sectors, which were for South American criminals. “What would happen if we went over there?” we asked. S pointed at the boys in the group and told us that we’d be knifed and then told a nervous girl that she’d be raped and her earrings ripped out.

The other section was collectively known as Population and was the subject of Rusty Young’s 2003 book ‘Marching Powder’ which tells the story of a prisoner here. Though the Bolivian government has banned the book in an attempt to hide the corruption that is rife in the country, photocopies change hands for large amounts of money in hostels and restaurants frequented by tourists. It is rumoured that Brad Pitt will be starring in a film version of the book in the next couple of years, which will no doubt raise the prison’s profile.

Everything costs money in San Pedro. To this end, it has an economy that the prisoners claim is more efficient than the one outside. S loved to tell us that anything you could get on the outside, you could get inside — there were restaurants, complete with Coca Cola logos, and shops. But the great thing about San Pedro was, according to S, that there was one thing that you couldn’t get outside that you could inside. And that was the world’s purest and most potent cocaine.

“Just on the other side of that wall,” he told us as we walked around the square with him, “is where it is made.” Raw ingredients were brought in and processed in the so-called laboratories that were overseen by men who knew exactly what they were doing, as they had done on the outside. Most criminals were inside for drug offences, a smaller minority for murder and rape.

There was a definite hierarchy, and though S liked to claim every prisoner was equal, this was clearly not the case. Those with money had better rooms, better drugs and a better lifestyle than those without. Those who had a useful trade or skill would be able to make money from it, just as the protagonist in ‘Marching Powder’ had done with his English language tours. That money would raise them up in the hierarchy. Money on the outside was the ideal, and with their connections, many in the drug trade had access to this.

“This is where the best cocaine in the world is made,” S continued as he directed us past the gym and the bar complete with pool table, to J’s room. J was high. The South African would sniff a huge amount of cocaine from his hand literally every few minutes for the five hours we spent with him that afternoon.

J was agitated, talking rubbish. We later discovered that he had had a nail put through his eardrum the previous day as he had wandered into the other sections. I asked why. He laughed and told me that it was due to his lack of greed. People wanted him to care more about money and he just didn’t. This was confirmed to us as he dished out packet after packet of cocaine to his guests. He would drink only Sprite, likely needing the sugar to combat the effects of the cocaine. This was in stark contrast to S, who necked about ten bottles of whisky every day but no cocaine.

J had also had an argument with his wife the previous day. As his wife was Bolivian, she was allowed to live inside the prison. Although it was a men’s prison, women and children were a common sight. It was genuinely believed that the economy inside was better than that outside so they preferred to live and work inside, with their husbands.

One reason tourists are attracted to the prison is that people like J can promise to deliver this high quality cocaine to anywhere in La Paz. We enquired. J spoke to the guy who had been delivering cocaine to his room and had generally been his dogsbody for the day. He wanted those who wanted to buy cocaine later to see the person that they would be meeting later that night.

A nervous looking boy wearing a red t-shirt came to the door. He was the dogsbody’s son and would be in charge of the delivery. Not more than 10 years old, he was nervous but he knew what he was doing. He had done it a million times before. City of God came to mind and the immorality of the jail and its business hit home.

We left. I had been the first person in and was the last to sign out that day. I asked for my camera. I eventually got it back. The prisoners’ daily bribe to the guards clearly worked well.

I looked back to see J clutching the bars. He looked more agitated. Was it the nail through the ear? Was it his wife? Was it too much cocaine? Or was it because as much as he claimed to love the prison, he saw us walking out and wished that he could do the same.