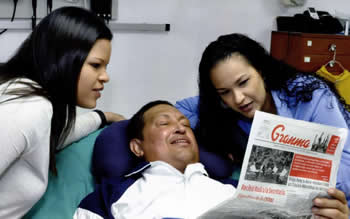 The first proof of life of President Hugo Chávez has been offered by Venezuelan authorities following two months of silence from the usually talkative president, who is in Cuba for treatment of cancer.

Photographs showing the 58-year-old president flanked by his two daughters at his hospital bed in Havana were broadcast on state television by Chávez's son-in-law, Science and Technology Minister Jorge Arreaza.

The Venezuelan government said the pictures were taken Thursday; a newspaper in the photo appears to verify this.

The pictures show a smiling Chávez in a white tracksuit. His daughters smile at the camera in the images in which Chávez is shown reading the Cuban Communist party newspaper Granma. The paper's date can be seen: Feb. 14, 2013.

"After two months of a complicated post-operative process, the patient remains conscious with his intellectual functions intact," Information Minister Ernesto Villegas said, adding that Chávez is in close communication with his Cabinet.

Chávez has not been seen nor heard from since a fourth cancer operation in Havana on Dec. 11. The six-hour operation led to complications including a pulmonary infection and unexpected bleeding, the government has said.

The Chávez regime in Caracas has been tight-lipped about the president's well-being. What little information had been released was vague and in some cases contradictory.

During his absence, Chávez has missed local elections, his own inauguration following his re-election to a fourth term and State of the Union address.

In his absence the country is being led by Chávez's chosen successor, Vice President Nicolás Maduro, 50, a former bus driver who helped win Chávez's release from prison after he had been convicted of taking part in a failed coup in 1992. Chávez was first elected president in 1998.