Venezuela's newspapers running out of paper to print 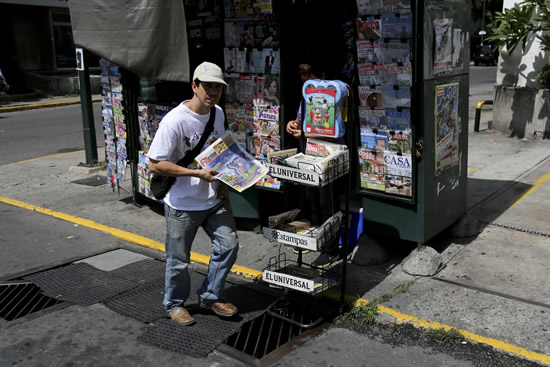 "This city has grown up around this newspaper," says Antonio Briceño, the editor of La Antorcha, a newspaper in Venezuela's eastern city of El Tigre. "But the problem is getting worse every day. The business is now unsustainable."

Unlike many of his counterparts in the United States who are struggling to find advertising revenue to fund their editorial work, Briceño's problem is in some ways more fundamental: "There's no paper."

Because of currency controls enacted a decade ago by the government of former president Hugo Chávez, there are so few U.S. dollars in Venezuela to pay for the import of newsprint that more than half of the country's local press is within weeks of going out of print, according to numerous editors and industry leaders spoken to by USA TODAY.

At least five outlets have already shut down. Briceño has around 30 days' supply left, more than many of his colleagues across the country.

"We're going to see a blackout of the local press," he warns.

The demand for greenbacks is extremely high in Venezuela, demonstrated by a black market exchange for hard currency on which dollars sell at six times their official government-set value.

Coupled with inflation of 42.6% — in the 12 months leading up to July — people earning in local currency here have long suffered. This is despite Venezuela sitting on top of the world's highest oil reserves, according to OPEC figures.

"We're in this paradox of having a wealthy country, rich in resources, that's so badly managed that we can't get dollars," says Briceño, who has edited the newspaper for four decades. "Sadly, any hope that the economy will change for the better is far away."

The currency controls were enacted in 2003 to combat capital flight. In recent months, the supply of dollars has dropped dramatically, pushing the black market rate up every day.

And it is not only newsprint that is lacking. Cooking oil, milk, chicken and other staples are often in short supply at supermarkets. Earlier this year, a lack of toilet paper here made international headlines prompting President Nicolás Maduro to blame the shortages on a "conspiracy" by the wealthy.

"There is no toilet paper; there is no flour, a basic food item for Venezuelans; sometimes there isn't even soap to bathe with!" says Roosvely Aguilar, a 22-year-old student, outside a Caracas supermarket.

Critics here believe that the lack of newsprint may have more sinister motives than simple supply-and-demand economics.

"It's political," says Tinedo Guía, president of the National College of Journalists. "It's a means of silencing the political opposition. It's very sad."

Long before Chávez came to power in 1999, the government of former president Jaime Lusinchi in the late 1980s was infamous for apportioning goods to supporters and denying them to opponents. The economic crisis during that period helped the rise in popularity over the following decade of Chávez himself.

But now the Chavistas are accused of it.

"The government itself runs lots of newspapers; they all have paper," says Rogelio Díaz, leader of the Regional Press Organization.

To bring in newsprint, importers must obtain a "Certificate of Non-Domestic Production," a document that demonstrates a requirement for dollars to import products that are not locally produced.

"Everyone knows that Venezuela doesn't produce paper, except, apparently, the government," Díaz adds.

The Ministry for Commerce is currently denying this documentation to many editors and importers, according to a survey of several by USA TODAY. The government failed to respond to a request for comment.

To obtain the dollars, importers must deal with the government's Commission for the Administration of Currency Exchange (CADIVI), a bureaucratic behemoth that sets strict limits on Venezuelans' access to hard currency at the official, and low, exchange rates.

"We're dependent on the government," says Adrián Corral who runs one of the country's major newsprint importers, Grialca. "It's not a free market that we're working in. We depend on whether the government lets us work or not."

Other mechanisms for exchange, at slightly devalued rates, have been tested in recent years by the government, though they have failed to satiate demand in a country that critics say should be flooded with petrodollars given that Venezuela has among the largest oil reserves in the world.

"The authorities do not have enough oil dollars to satisfy the large and growing pent-up demand for foreign currency for imports and other needs," says Alberto Ramos, an analyst at Goldman Sachs in New York.