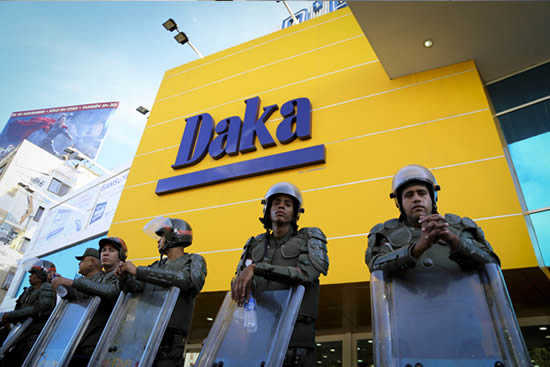 Thousands of Venezuelans lined up outside the country's equivalent of Best Buy, a chain of electronics stores known as Daka, hoping for a bargain after the socialist government forced the company to charge customers "fair" prices.

President Nicolás Maduro ordered a military "occupation" of the company's five stores as he continues the government's crackdown on an "economic war" it says is being waged against the country, with the help of Washington.

Members of Venezuela's National Guard, some of whom carried assault rifles, kept order at the stores as bargain hunters rushed to get inside.

"I want a Sony plasma television for the house," said Amanda Lisboa, 34, a business administrator, who had waited seven hours already outside one Caracas store. "It's going to be so cheap!"

Televisions were the most in-demand item in the line outside one Caracas store, though people waited more than eight hours for fridges, washing machines, sewing machines and other imported appliances.

Water and snacks were being sold outside the store by savvy Venezuelans keen to profit from the commotion. Happy customers weaved giant television screens and other items back to their cars through the crowds.

Images circulating online as well as reports by local media appeared to show one Daka store in the country's central city of Valencia being looted.

"I have no love for this government," said Gabriela Campo, 33, a businesswoman, hoping to take home a cut-price television and fridge. "They're doing this for nothing but political reasons, in time for December's elections."

Maduro faces municipal elections on Dec. 8. His popularity has dropped significantly in recent months, with shortages of basic items such as chicken, milk and toilet paper as well as soaring inflation, at 54.3% over the past 12 months.

Economists are expecting a devaluation soon after the election, likely leading to even higher inflation.

The opposition, which has long struggled to gain ground against the country's socialist government, is hoping that the elections will be seen as a referendum against Maduro.

The president, who took over from Hugo Chávez in April 2013, appeared on state television Friday calling for the "occupation" of the chain, which employs some 500 staff.

"This is for the good of the nation," Maduro said. "Leave nothing on the shelves, nothing in the warehouses … Let nothing remain in stock!"

The president was accompanied on television by images of officials checking prices of 32-inch plasma televisions.

Daka's store managers, according to Maduro, have been arrested and are being held by the country's security services. Neither Daka nor the government responded to requests for comment.

Maduro has long blamed the opposition for waging an economic war on the country though critics are adamant that government price controls, enacted by Chávez a decade ago, are the real cause for the dire state of the economy.

With such a shortage of hard currency for importers and regular citizens, dollars sell on the black market for nine times their official, government-set value. Prices, at shops such as Daka, are set according to this black market, hence the government's crackdown.

Chávez often theatrically expropriated or seized assets from more than 1,000 companies during his 14-year tenure. This, among other difficulties for foreign firms, led to a severe lack of foreign investment in the country which, according to OPEC, has the world's largest oil reserves.

"This is more like government-sanctioned looting," said 42-year-old Caracas-based engineer Carlos Rivero. "What stops them going into pharmacies, supermarkets and shopping malls?"

Not all were for the bargain hunting. One taxi driver screamed at the waiting crowds as he went past a Caracas branch of Daka, accusing them of "abusing" the system.