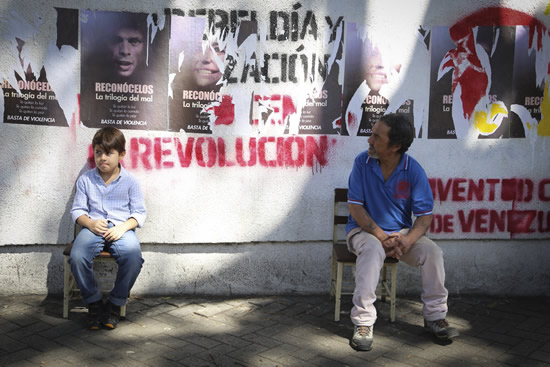 As Venezuelans voted in local elections Sunday, many analysts called the elections a referendum on President Nicolás Maduro himself — a leader who faces a crumbling economy with major shortages and 54.3% annual inflation, regular power outages and one of the world's highest murder rates.

At the same time, Hugo Chávez, who named Maduro his successor before dying in March, appeared to be weighing heavily on the minds of voters as they picked mayors and councilors across the country.

In the Caracas barrio of El Valle, Osman Matute walked out of a polling station and echoed the view that this was more than just a vote for a local mayor. "I just voted for Chávez, my president," said the 42-year-old plumber. "This is a vote for my country, my government, for Maduro."

Upsetting the opposition and some election observers, Maduro declared that this election day be one of "loyalty and love" for Chávez. Indeed, since coming to power in April, Maduro has worked tirelessly to continue Chávez's legacy, citing the former president in every speech and often appearing alongside his image.

"This election is a plebiscite on Maduro's leadership, but one that has as much to do with Maduro's abilities to present a unified vision for the Chavistas as with concrete policies," said George Ciccariello-Maher, author of We Created Chávez and assistant professor of politics at Drexel University in Philadelphia.

"After all, the narrowness of Maduro's own election in April had less to do with dissatisfaction with the Chavista program than with doubts over Maduro's ability to carry that program out," he said.

Turnout Sunday appeared much lower than previous elections in which Chávez either stood or campaigned. The opposition, with Henrique Capriles at the helm, has lost two major elections in just over a year. Yet, Capriles continues to push supporters to vote in what he has called Operation Avalanche.

"I'm here to change this system we have now," said opposition supporter Henrique Rodríguez, 73, at a voting center in Caracas. "It's sad that there aren't so many people here. Most people want change; things aren't going well."

The government seemed to be winning the overall vote Sunday, said Caracas pollster Luis Vicente León. The opposition hopes to at least control major cities such as Caracas and Maracaibo.

In his most decisive move to date, Maduro sent the military into some major retail outlets last month to ensure "fair prices," which in effect slashed the cost of products such as TVs, fridges, clothes, shoes and many other imported items.

That led to what critics called "organized looting" with lines of people emptying shelves and shop owners concerned that if they didn't cut prices, they would be detained. More than 100 business owners were arrested in the subsequent crackdown.

While critics and economists decried the move's lack of sustainability, it seems to have worked at least in the short-term to bolster the government.

"Maduro's recent moves against what he calls parasitic capitalism have demonstrated a willingness to act decisively, which has strengthened his support among the Chavista base," Ciccariello-Maher said.

Outside the El Valle polling station, Matute was in support of the policy: "It's good because it stops the businessmen robbing us."

Pollster León said that Maduro's government has, thanks to the policy, risen in "every important index" and is the favorite to win overall.

"Maduro appears to have taken the bull by the horns, creating a scapegoat and pushing prices down. It's enough to recover part of his political support," he said, adding that "unpopular decisions" could be taken after the elections in order to "recover economic equilibrium."