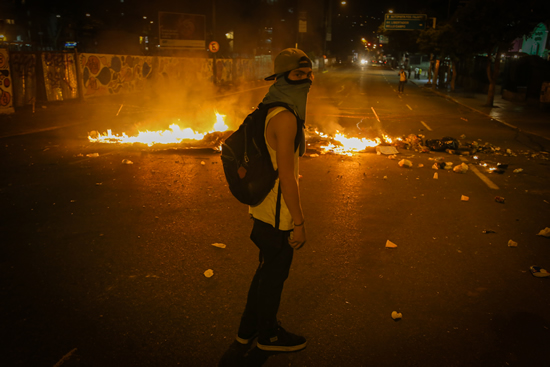 Students have taken to the streets across Venezuela this week in major protests against the government here. At least three people have been killed and dozens injured and arrested. This is the largest defiance of President Nicolas Maduro’s rule since he came to power just under a year ago.

In Caracas’ Plaza Altamira, which has long been a focal point for opposition anger, protesters burned trash and pelted police with stones. Authorities responded with tear gas and water tanks late into the evenings.

Similar events took place around the country as students demand the release of those recently arrested and justice for two students killed Wednesday. More generally, there is growing anger at soaring inflation and a murder rate that according to local NGOs is one of the world's highest.

Around 100 protesters were arrested in recent days and, according to the government, a quarter of them have been released. The rest are to be processed shortly, in the hopes of alleviating some of the anger felt by the students.

Some on the square in Caracas on Friday, however, vowed to continue their protests until Maduro was no longer in power.

"It doesn't matter how long it takes, a week, a month. We'll be here every single day," Jose Pérez, a 34-year-old student told me as flames rose from piles of trash all around us. "We are at war,” he said.

Maduro has accused the protesters of trying to launch a coup against him. There is some precedence for this. Maduro’s predecessor, Hugo Chávez, was ousted for about 36 hours in 2002 amid similar protests.

In a special televised act earlier this week, the 51-year-old president said that any protest that had not received permission from the government would be banned.

"People have a right to their lives," Maduro said, blaming the opposition for the deaths. "Enough! I'm not going to allow it any more."

The opposition in turn blames armed pro-government militias, which it says are backed by authorities here, for fomenting the violence.

An arrest warrant has also been issued for Leopoldo López. López is a major opposition leader here who has backed the protests. The 42-year-old, who was once touted as the country's next president, is now charged with murder and terrorism. Yet, he continues to taunt the government.

"Don't you have the guts to arrest me?" he asked on Twitter, adding that perhaps the government was awaiting orders from Havana.

Diosdado Cabello, the head of Venezuela's National Assembly, said López was trying to escape the country and called him a "coward."

The unrest points toward a split within the opposition as Henrique Capriles, the opposition's leader who lost elections against both Maduro and Chávez, has distanced himself from the demonstrations.

Capriles is perhaps aware that the violence plays into the government’s hands as they are able to accuse the opposition of fomenting it.

Yet, opposition supporters see little hope in Capriles after having lost two presidential elections, and support is growing for more hardline members of the opposition.

"López is more radical than Capriles and that's what this country needs right now," Tulio Manzini, a 22-year-old student in Plaza Altamira told me.

The blame game between the opposition and government looks set to continue. Many in the streets say they will stay there until things change, yet it is difficult to see just how that will happen with no election looming.

For World Report, this is Girish Gupta in Caracas, Venezuela