Opposition leader Henrique Capriles returned to the fore this weekend, leading a rally of thousands and offering up a unified opposition as violent protests continue across the country.

The demonstrations, which have lasted for weeks, are the biggest test for the presidency of Nicolás Maduro, who came to power 10 months ago after the death of Hugo Chávez.

"If we need to get into the ring and put on some boxing gloves, let's do it," Capriles said on a stage backed by opposition heavyweights, including the wife of jailed leader Leopoldo López.

López was arrested Tuesday by authorities and charged with instigating the protests and, according to the government, being behind the resulting violence, which has left 11 people dead and injured more than 100.

STORY: Protesters in Venezuela call for end to rioting

Despite losing elections against Chávez and Maduro, Capriles, 41, has become the first opposition leader to bring the disparate group together after more than a decade of it failing to make any electoral headway against Chávez.

Capriles said he will go to Maduro's Miraflores presidential palace Monday for talks.

"The sheer relief of having somebody take charge and lead was overwhelming for me," wrote Francisco Toro, a prominent blogger who has heavily criticized the protest movement though he backs its aims to enact change.

Tens of thousands are protesting across the country amid spiraling inflation — 56.3% over the past year — and one of the world's highest murder rates.

The protests began in the western city of San Christóbal, in the state of Táchira, after the attempted rape of a student. Her colleagues protested at the lack of security, and some were detained by authorities and allegedly beaten. That ignited further protest, which spread quickly across the country and was harnessed by López in his call to the streets.

Unlike López, Capriles tried to gain favor with disgruntled Chávez supporters, especially among the poor. During the 2012 election campaign, he would ride into slums on his motorbike and play basketball with locals in a similar manner to Chávez himself more than a decade earlier.

López was educated at Harvard and speaks flawless English — traits that are not admired among supporters of the socialist government.

Under Capriles' leadership, the protests have a chance to galvanize the entire opposition, rather than just its wealthier or more radical elements.

In his speech, Capriles highlighted the opposition's reluctance to leave wealthy areas of the city. Most of its rallies and the accompanying violence have taken place in Plaza Altamira, long a focal point for opposition unrest.

"Everybody there is already convinced!" he told the crowd. "It's in the government's interests for the protests to be in Altamira."

"With López in jail, Capriles is retaking the opposition leadership," said Carlos Romero, a Caracas-based political analyst. "He is very rational and understood that the protests went too far and the majority of Venezuelans want peace."

Maduro, 51, has appeared on state television, denouncing the protests by focusing on those injured or killed by the violence.

"A Nazi-fascist current has emerged again in Venezuela," Maduro said. "They want to lead our nation to violence and chaos."

"We love peace, but we will not kneel," Capriles said Saturday.

Capriles hasn't won over everyone among the opposition.

"Even though Capriles' speech was good, people on the streets are going to stay there until their rage has been drained — or there's a change in the government," said Mariana Vincenti, 24, a student protester. "Capriles isn't fulfilling the needs of the people." 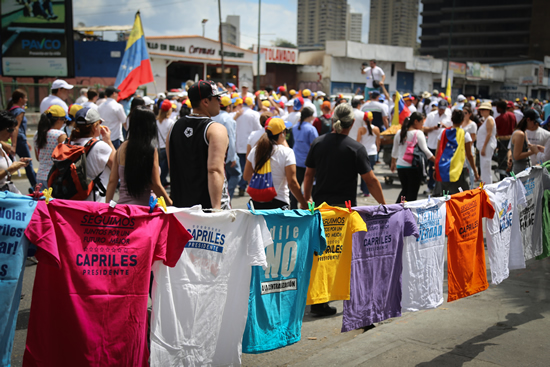