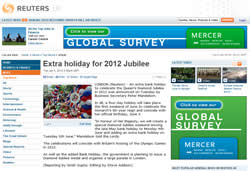 In all, a four-day holiday will take place the first weekend of June to celebrate the monarch's 60-year reign and coincide with her official birthday, June 4.

"In honour of Her Majesty, we will create a special Diamond Jubilee weekend moving the late May bank holiday to Monday 4th June and adding an extra bank holiday on Tuesday 5th June," Mandelson told the Lords.

The celebrations will coincide with Britain's hosting of the Olympic Games in 2012.

As well as the added Bank Holiday, the government is planning to issue a Diamond Jubilee medal and organise a large parade in London.