How Students Lay Siege To One Town In Venezuela - And Inspired Protesters Across The Country
Photo: Girish Gupta

How Students Lay Siege To One Town In Venezuela - And Inspired Protesters Across The Country
Girish Gupta
BuzzFeed | Mar. 11, 2014 | San Cristóbal, Venezuela

Teenagers strut around the state capital San Cristóbal, burning barricades on every street corner, wielding rocks and petrol bombs. They’ve been here on the streets now for more than a month. San Cristobal is a city under siege — by its own residents.

“We forced this city into collapse,” said Omar Martínez, a 28-year-old lawyer standing next to a burnt-out World War Two-era Greyhound armored car, once a monument to an “unknown soldier,” celebrating the state’s National Guard, now a destroyed focal point for the protesters. “Then came the repression, with rubber bullets and human rights violations. But us gochos are strong,” he said, using the once disparaging term used to describe people of this western region of Venezuela, a term they now wear with a badge of pride. “They can kill one of us but the rest will continue.”

San Cristobal, nestled in the Andes mountains, is where the protests that have gripped Venezuela for the past several weeks began.

In early 2013, the city’s University of the Andes’ Botanical Gardens began to be taken over by drug dealers and other petty criminals. The country is one of the world’s most dangerous, thanks in large part to an ineffective police force. Students, who enjoyed the quiet beauty of the gardens, fell victim to the crime and lobbied to have the state government bring in more security. The state failed to secure the site, as it has around the country for 15 years, prompting one of the highest crime rates in the world.

Then, early on the evening of Feb. 3, a 17-year-old girl was robbed. Staff and students at the university say they fear she would likely have been raped had it not been for campus security scaring away her attackers. Little more is known about the incident though the news quickly spread by word of mouth across campus. The next day, a few students came out to protest at the university. One of them was 23-year-old Reinaldo Manrique, an accounting student. “It was the straw that broke the camel’s back,” he said. Manrique was detained at the protest and sent to a detention center hundreds of miles away in the city of Coro. He was never told why. In solidarity with Manrique and others detained and reportedly mistreated, students not only in San Cristóbal but across the country began to join in demonstrations which now take place every single day across the country. “Thanks to many factors, this situation quickly moved from micro to macro,” Manrique said.

The protesters’ qualms are manifold. The Venezuelan economy is in dire straits. Prices have risen more than 50% in the last year. Shortages of basic goods manifest themselves as lines of shoppers outside supermarkets stand more than 1,000-strong. “It’s not normal, for God’s sake,” said Frances Ohera, 35, standing in a long line at one supermarket on the outskirts of San Cristóbal. “I’ve been waiting six hours for flour and milk.” Ohera’s case was not unique. Every food outlet in the city features long lines. The same is true in Caracas, the capital, but here it is much worse. San Cristóbal lies on the border with Colombia, and Colombians regularly cross over to buy up price-controlled goods for next to nothing and resell them back home for huge profits. 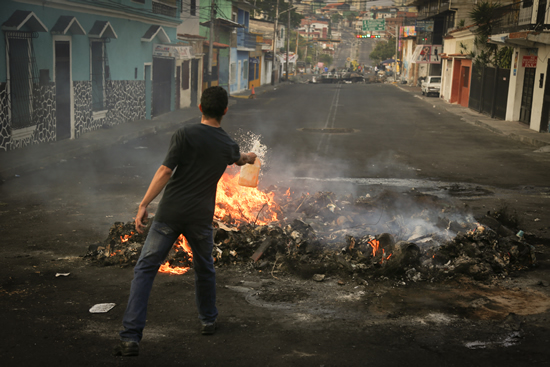 To keep life ticking along, a truce between virulent protest and the ability to go about daily life has been reached: Transport is generally allowed through barricades and shops largely open around lunchtime. After that, the city becomes a ghost town of sorts, under siege with the support of some — though not all — of its residents.

Many shops have closed altogether for fear of looting. Gangs of criminals have taken advantage of the disquiet to make crime even more common. Venezuela has one of the world’s highest murder rates, with local NGOs putting the figure at around 70 killings per day, a figure that is more than double that of Iraq for the same population. It is an issue that transcends class divisions.

After the initial spark in San Cristóbal, the protests quickly spread to Caracas, 400 miles away, where police have battled them with water cannons and tear gas nearly every night for three weeks. Across the country, more than 20 people have been killed in the violence. On Monday, a Chilean became the first foreigner killed in the protests as she cleared a barricade in Mérida, another of Venezuela’s Andean cities. On that same evening, the mayor of San Cristóbal confirmed the death of Daniel Tinoco, a 23-year-old protester who told BuzzFeed before he died that he was keen to see a change of government in Venezuela. The deaths have galvanized protesters in the cities to stay on the streets.

The president, Nicolas Maduro, calls them “Nazi fascists.” Opposition leader Henrique Capriles in turn has used the word “genocide” to refer to the government’s “brutality” and “repression.”

Politicians have jumped on the protest bandwagon, and one opposition heavyweight, Leopoldo López, is currently behind bars for his part in the protests. López was once touted as a potential future president. He encouraged opposition supporters onto the streets on Feb. 12, the day that clashes first erupted in Caracas, and two people were shot dead. On hearing of the arrest warrant against him shortly after, López, a charismatic 42-year-old, went into hiding while his offices and home were raided. He asked supporters to march with him to the state prosecutor’s office where he would ceremoniously surrender. “If they put me in prison, it’ll wake up the people,” he said from a megaphone minutes before being detained by the National Guard.

López has not, however, become a martyr. Protesters both in Caracas and here in San Cristóbal have little interest in the nuances of opposition politics and the subtle maneuverings of those within it such as López and Capriles, the opposition leader who stood twice for the presidency: once against Chávez and later against Chavez’s chosen successor, Maduro. “This country is not going anywhere right now,” said José Pérez, 34, as he walked toward the barricades in Caracas one night. “Whoever, Capriles, López, it doesn’t matter. We need a change.”

Despite the growing protests, Maduro maintains a strong hold across Venezuela. The 51-year-old moustachioed former bus driver is essentially living off Chávez’s legacy, while lacking his charisma. Though Maduro is suffering the ills of his economic and social policies, the next electoral chance the opposition has against him is a referendum it can call in two years. Maduro has accused protesters of plotting a coup against him.

“We need a coup though,” said Angela Trujillo, a 23-year-old beautician who has been out on the streets nearly every day since protests began. She admitted that it made her sound radical but she, and many others in the opposition, see little other option.

Even the opposition’s leaders are unsure what’s next. It is clear that López and Capriles are not best of friends behind closed doors. López is seen as turning himself into a radical martyr while the other is taking a milder tone, as he did during his election campaigns, well aware that to win any election he must attract those who once supported Chávez.

And so the protests continue. “This is going to continue until we achieve our aim,” said Andryth Niño, a 19-year-old student leader in San Cristóbal, as she stood next to a burnt-out Greyhound armored car that did not look like it would be moving anywhere anytime soon.