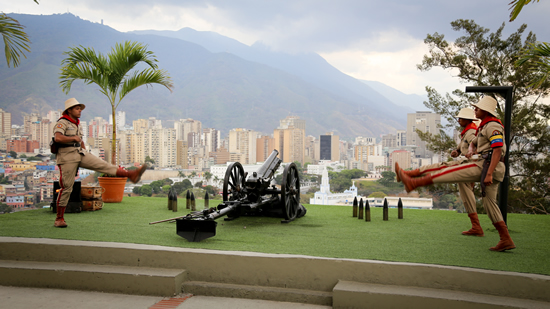 The socialist leader's face is memorialised on every corner in the barrio. One mural shows Jesus Christ in its centre in a depiction of the Last Supper, his disciples including Chavez and other leftist figures such as Ernesto "Che" Guevara, Fidel Castro and Karl Marx.

"Maduro has made mistakes but he's fighting," Guerrero told Al Jazeera, clad in a red t-shirt and cap emblazoned with Chavez's name. "Sadly, he has let inflation and crime go wild."

Guerrero said he voted for Maduro in the previous presidential election. However, the 25-year-old is unsure whether Maduro will get his support again.

The simple fact that Maduro is not Chavez is one of the president's biggest hurdles. He lacks Chavez's cult of personality and charisma. As a result, his inability to resonate with people, coupled with widespread economic problems, has given the opposition a foothold.

Large anti-government protests have swept the country for more than two months, leaving at least 40 people dead and hundreds injured. Maduro's popularity has plummeted as Venezuela faces shortages of basic goods, one of the world's highest murder rates and annual inflation of nearly 60 percent.

"We are fighting because we want a better country and we want a new future," said Silvana Lezama, a 20-year-old student in Caracas who has been on the streets nearly every day since protests began.

Perhaps more worrying for Maduro is that people such as Guerrero, who still wear the Chavez t-shirt, are becoming disillusioned. While they are not out on the streets protesting against him, some are looking towards the opposition.

In response, the president invokes Chavez at every opportunity and delivers speeches in front of giant photos of Chavez. His policies have followed the Chavez playbook, most notably the social welfare programmes.

"Chavez was the great protector of the people," said Maduro on the first anniversary of Chavez's death in March. "He loved and respected the poor. He gave them education, rights and dignity."

That rhetoric has kept many who supported Chavez loyal to Maduro. One Chavez supporter, Gloria Torres, who lives in Petare and organised prayer meetings for Chavez during the final months of his life, stands by his successor.

"Nicolas has worked every minute of the year for the good of this country, the good of the people," the 52-year-old told Al Jazeera. "And of course the opposition is working just as hard to sabotage his work."

Chavez, in his final months, made Maduro vice-president and publicly named him as his successor should he not be able to return to the presidency. Maduro has vowed to continue and consolidate the social programmes which formed the cornerstone of Chavez's policies to help the poor.

The so-called "missions" provide everything from medical treatment to housing to the country's marginalised communities. Chavez set up 28 missions during his presidency and Maduro has added seven more, including one to battle corruption.

Chavez's greatest tangible legacy is likely to be those missions. Whoever governs Venezuela in the coming years must maintain them and therefore acknowledge the issues faced by the country's poor.

Maduro once worked as a bus driver in Caracas, a past that bolsters his own working class credentials. "Look where he's headed, Nicolas, the bus driver," said Chavez as he anointed him. "How the bourgeoisie used to laugh at him."

Soon after Chavez died, Maduro infamously spoke of how the former leader appeared to him as a bird and blessed his presidency. Unfazed by criticism and derision from the opposition, Maduro continued to riff on the subject, laughing at himself and even releasing birds at campaign rallies.

In August, when recounting the biblical story of the Feeding of the Multitude, Maduro used the word "penises" instead of "fish" - two words which are forgivably similar in Spanish. But this simply invited much laughter from critics and supporters alike.

"Maduro is seen as not well-educated enough to be the president of Venezuela," Carlos Romero, a local political analyst, told Al Jazeera. "He does not have charisma and is seen as too radical and sectarian to solve the problems left by Chavez."

Even before Maduro's inauguration in April last year, protesters took to the streets - angry at claims that his election had been rigged. Opposition leader Henrique Capriles also cried fraud.

Analysts suspected that Maduro would have a tough time rallying the Chavista base and keeping potential rival elements within his own party in check.

Diosdado Cabello is the president of the National Assembly. He and Maduro are presenting a united front - though there has long been talk of historic rivalry between the two leaders.

"Because of Maduro's tenuous leadership in the coalition, his government has spent its first year in crisis mode, avoiding tough decisions and emphasising unity," said David Smilde, a sociology professor at the University of Georgia.

But Smilde added: "Maduro has done better than any of us expected."

Maduro has continued to blame Washington for an "economic war" waged against Venezuela, fuelling shortages and rampant inflation, and has kicked out US diplomats - just as Chavez did. "Venezuela is facing a fascist coup, waged by the extreme right," Maduro said.

The shortages are largely due to strict currency and price controls, which began with Chavez more than a decade ago. Various devaluations and exchange mechanisms have failed to rein in the economy. At the same time, both producers and importers lack economic incentives.

This has caused shortages of not just electrical items but many basic goods, including basic food stuffs and even toilet paper.

These problems are a major reason for many taking to the streets over the past two months - but politics has also played a role. Venezuela has been a largely polarised country over the past 15 years, since Chavez came to power. The opposition has struggled to make serious headway.

In the latest unrest, protesters have little political leadership and few concrete aims, however, and their numbers are dwarfed by similar protests held in 2007 and 2002.

"The problem with these protests is that they do not have any clear demands," said Smilde.

While Maduro himself may not always be popular even among Chavez-supporters, a jump to back the opposition would be a step too far for many. Today's opposition reminds many of the four decades that preceded Chavez's presidency, in which the poor were largely forgotten by wealthy elites in power.

So Maduro's base of supporters remains solid for now - and there seems little hope for the opposition that he will lose power.

Yet, the protests rumble on. Carlos Vargas is one student protest leader. "We won't rest until we recoup this country," he said.