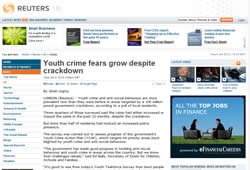 Photo: Girish Gupta
LONDON (Reuters) - Youth crime and anti-social behaviour are more prevalent now than they were before in areas targeted by a 100 million pound government crackdown, according to a poll of local residents.

Three-quarters of those surveyed said the rates had either increased or stayed the same in the past 12 months, despite the crackdown.

But more than half of residents had noticed an increased police presence.

The survey was carried out to assess progress of the government's Youth Crime Action Plan (YCAP), which targets 69 priority areas most blighted by youth crime and anti-social behaviour.

"The government has made good progress in tackling anti-social behaviour and youth crime in areas across the country. But we know that challenges remain," said Ed Balls, Secretary of State for Children, Schools and Families.

"It's good to see from today's Youth Taskforce Survey that most people in those areas where youth crime is a particular problem feel we are tackling the causes of the issues that matter in their community.

"However, it is also clear that there is still a lot of hard work to do to make sure no local residents are troubled by anti-social behaviour."

Nineteen percent of those surveyed believed that crime and anti-social behaviour had decreased.

The Youth Taskforce surveyed 2,750 people from YCAP areas in England.

The data forms part of a report from the Department for Children, Schools and Families' to be published in February.