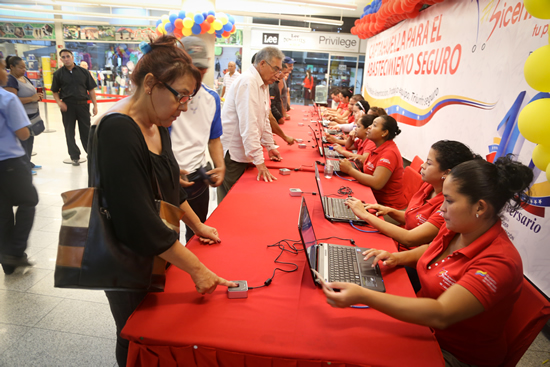 The government has begun implementing a novel solution to chronic short supplies of basic goods at its supermarkets: fingerprinting shoppers to prevent hoarding.

Starting in September, consumers at six state-run stores must register their fingerprints, which are scanned to keep track of what they buy. The aim is to limit bulk purchases of 23 basic goods, including flour, rice, milk, sugar, toilet paper, coffee, margarine, oil, chicken, meat, shampoo and detergent.

So far, around 800,000 people have registered their fingerprints, and the government plans to expand the program to other stores.

The initial announcement of the fingerprinting scans was greeted by some protests from consumers fed up with an economy wracked by high inflation and shortages stemming in part from currency controls that have deprived importers of dollars they need to pay for foreign goods.

However, since the system went into effect, it has won praise in some quarters for shortening lines, distributing scarce goods more equitably and preventing profiteers from buying large quantities of popular goods and reselling them on the black market at huge markups.

"It's marvelous," said shopper Luis Senorelli, 45, as he packed onions into a small bag at Bicentenario, a huge government-run supermarket in Caracas. "By taking our fingerprints, they can control the people who buy at fair prices and resell products at three times the price."

Carlos Monasterio, a manager at the store, said the new system is working well. "The lines are shorter and we have more products," he said.

The fingerprinting scans, however, are not a long-term solution to the root causes of the shortages — controls that are making Venezuelan currency, the bolivar, worth less and less. Demand for dollars is so high that those desperate for hard currency are willing to pay 16 times the official exchange rate of 6.3 bolivars to the dollar, according to websites that track the black market rate.

In part because of the plummeting value of the bolivar, the inflation rate has soared to more than 60% in the last year.

"I can assure you the black market rate will climb even higher if policies are not changed and inflation continues to run wild," said Alberto Ramos, a senior analyst at Goldman Sachs in New York.

Leftist President Nicolás Maduro blames the problems on an "economic war" waged against Venezuela by capitalist enemies. "We are forced to implement this (fingerprinting) to combat smuggling and all the other methods used by criminal bourgeoisies and parasites to destroy our country," he said in announcing the scanning system.

Unhappiness with conditions was summed up by angry consumers standing in line outside a pharmacy here in the capital. "We're living with a shortage of everything," said Olga Gorrín, 67, clutching a bag full of shampoo. "This country is a disaster."

Omaira Tovar, 65, carrying two bags filled with shampoo, detergent and sanitary towels, griped, "I'm so sad about what's happening to my country but it's our own fault. We voted for this."