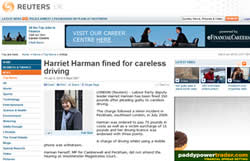 The charge followed a minor incident in Peckham, southeast London, in July 2009.

Harman was ordered to pay 75 pounds in costs as well as a victim surcharge of 15 pounds and her driving licence was endorsed with three points.

A charge of driving whilst using a mobile phone was withdrawn.

Harman herself, MP for Camberwell and Peckham, did not attend the hearing at Westminster Magistrates Court.

Prosecutor Michael Jennings said Harman was attempting to manoeuvre her Rover 75 out from between two parked vehicles when she reversed into one of them.

The owner of the parked car was watching from his flat nearby and called police.

Jennings said no damage was caused to either car and no insurance claims had been made.

The incident took place at 10 p.m. after Harman had visited constituents made homeless by a fire at a block of flats.

Her spokeswoman said: "Ms Harman fully accepts the court's judgement. [She] is pleased that the potential charges of leaving the scene of an accident without exchanging particulars and failing to report an accident to the police have been dropped."

Harman, a QC and former Solicitor General, already had six penalty points on her licence after being caught twice speeding in a 30 mph zone. She now has nine.

Motorists who accumulate 12 points on their licence face a ban.