Bookie refuses to pay out £7 million on snow bet 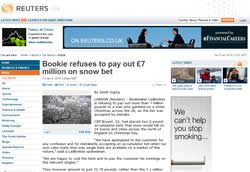 Photo: Girish Gupta
LONDON (Reuters) - Bookmaker Ladbrokes is refusing to pay out more than 7 million pounds to a man who gambled on a white Christmas across the UK, as the bet was accepted by mistake.

Cliff Bryant, 52, had placed two 5-pound accumulator bets that snow would fall on 24 towns and cities across the north of England on Christmas Day.

"We have apologised to the customer for any confusion and for mistakenly accepting an accumulator bet when our own rules state that only single bets are available on a market of this nature," said a Ladbrokes spokesman.

"We are happy to void the bets and to pay the customer his winnings on the relevant singles."

They however amount to just 31.78 pounds, rather than the 7.1 million Bryant was expecting.

The graphic designer from Southampton, who told the local Southern Daily Echo newspaper he was "gutted" and would seek legal advice, claims the first accumulator would have won him 4.9 million pounds, with the second adding 2.2 million.

"If I make a mistake in my work like that it costs me dearly and I think the offer should be a lot more generous than they have made," he told the paper.

Ladbrokes should have made their rules clearer, he added.

"They are one of the leading bookmakers in the country and I think they ought to do their homework a bit better in future."

Ladbrokes gave Bryant details of the Independent Betting Adjudication Service (IBAS), an impartial adjudicator on disputes that arise between gambling operators and their customers.

Danny Cracknell, a manager of the IBAS, told Reuters that Bryant had been in contact and they would be investigating the issue once he had completed the relevant forms.