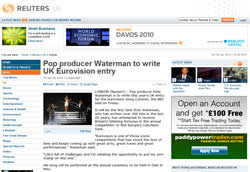 LONDON (Reuters) - Pop producer Pete Waterman is to write this year's UK entry for the Eurovision Song Contest, the BBC said on Friday.

It will be the first time that Waterman, who has written over 200 hits in the last 25 years, has attempted to reverse Britain's faltering fortunes in the annual competition to find Europe's catchiest tune.

"Eurovision is one of those iconic competitions that has stood the test of time and keeps coming up with great acts, great tunes and great performances," Waterman said.

"Life's full of challenges and I'm relishing the opportunity to put my own stamp on this one."

His song will be performed at the annual ceremony to be held in Oslo in May.

Waterman has worked with the likes of Kylie Minogue and Rick Astley, and with his three-man production team Stock Aitken Waterman, scored more than 100 top 40 hits in Britain.

Last year's UK entry also had input from a high-profile music maker, with Andrew Lloyd Webber creating a TV talent show to find the candidate for the contest, who eventually came fifth.

The Eurovision contest began in 1956 as an elegant black-tie event but is now widely derided as the height of musical kitsch in much of western Europe.

Mocked for its "bubblegum pop" and overtly political voting by Eastern European countries, the ceremony has been won five times by the UK, with Katrina and the Waves taking home the last British gong in 1997.